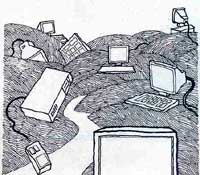 Six months ago, the Union department of electronics (DoE) announced an ambitious plan to create electronics hardware technology parks (EHTPs) in order to help the country's stagnating electronic components industry by giving it access to international technology and to collaboration with multinationals.

However, EHTPs have, failed to take off owing to the finance ministry's failure to announce the concessional customs rates that it had promised the firms. The finance ministry says it is not satisfied about how the ensuing revenue loss will be made up. Hence, it has not processed any of the 33 applications received so far from some of the world's largest electronic companies, including Sony and Mitsubishi. But, DoE officials are undismayed and have evolved a scheme to set up software technology parks in Ghaziabad (UP), Bhubaneswar, Gandhinagar (Gujarat) and Thiruvananthapuram.