Want a healthy heart, a thin wasteline and more ? Then ignore elevators and escalators, and use stairs instead 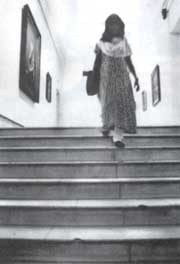 A VERY simple health intervention has been making waves in the US. Signs in shopping malls outlining the health benefits of using stairs instead of escalator have increased their use significantly. "Simple and inexpensive interventions like these can increase physical activity," conclude researchers from the Johns Hopkins School of Medicine in Baltimore, Maryland, USA (Annals of Internal Medicine, 1998, Vol, 129, No 4).

The researchers studied nearly 18,000 visitors to a Maryland mall, floors of which are connected by a flight of stairs flanked by escalators. Prior to the study, the researchers determined that over four per cent of all mall patrons used stairs. The investigators then placed one of two signs at the bottom of the stairs. One sign read: "Your heart needs exercise, use the stairs," while another read: "Improve your waistline, use the stairs." Overall use of the stairs jumped to seven per cent after placing signs, say the researchers, and to 7.5 per cent after the weight-related sign was put up.

Interestingly, response rates did not vary according to the gender. However, the investigators noted that older shoppers' (over 40 years of age) response to both the signs was greater, compared to their younger counterparts. While stair-use among the under-40 group rose from four per cent to six per cent after placing the weight-related sign, it nearly doubled among those above 40, from five per cent to nine per cent. Also, stair use was more among those people who thought they were overweight. According to one of the researchers, Ross Andersen, the team of investigators estimates that if such signs were placed in all US malls, more than 1.6 million people would take to the stairs each day, instead of using escalators or elevators.

But can climbing stairs make a difference to an individual's health by itself? Anderson says that stair-climbing and walking are two most practical ways for people to become active. Research suggests that the simple act of walking up and down just two flights of stairs each day can produce an annual weight loss of about 2.7 kg in a person with an average build. With surveys suggesting a rise in the number of overweight individuals globally, such simple interventions may help stem this tide, especially as most of them shun exercise.