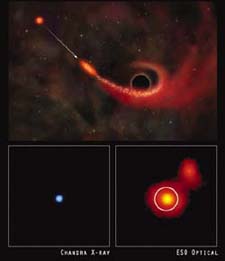 birth and death of stars has intrigued scientists all along. A recent study has dispelled the notion that massive stars die with violent accompaniments such as bursts of light and ejection of chemicals (also called supernova explosion). Astronomers have stumbled upon a class of such stars that die silently.

On June 14, 2006, nasa detected a burst of electromagnetic radiations called gamma rays over 102 seconds in a dwarf galaxy 1.6 billion light-years away. The initial signs of death of a massive star led to a wait for the huge burst of light and chemicals that characterises the death of such stars. But none was found. The new star-deaths initiated a debate among scientists that resulted in four papers published in the December 21 issue of Nature (Vol 444, No 1047).

"The confusion is a bit like not hearing the thunder from a nearby storm when one could see a long-lasting flash," says Johan Fynbo of the dark Cosmology Center at the Niels Bohr Institute of Copenhagen University in Denmark.

Until now, scientists thought stars die in two ways. One, when stars up to eight times more massive than the sun run out of energy, their outer layers peel away to leave behind a smouldering stellar corpse, called a white dwarf. Two, stars more than eight times heavier than the sun, die more violently with huge gamma ray bursts. When these stars run out of energy, their cores combine triggering titanic explosions that can fling several solar masses with chemicals like hydrogen, nitrogen and carbon into space. After the blast, what's left in place of the star is either a neutron or a black hole.

It was believed that while massive stars had longer explosions (more than two seconds), the smaller ones had shorter bursts. The long bursts were associated with a younger stellar population marking the death of massive stars whose lifetime is short while the short bursts were associated with old stellar population. Fynbo and his team observed another long gamma ray burst without a supernova in a small spiral galaxy that lasted only four seconds.

"It is easy to explain one of these anomalous events as a fluke but two strange events give our claim some strength," says Joshua Bloom, an astronomer at the University of California, Berkeley. "In the case of a dying massive star, it loses its source of heat and pressure in the centre and hence collapses. Some mechanism causes some of the outer layers of the star to be ejected away from the star. A supernova is the result of emission from this. If nothing is ejected out then there will be no supernova," says Fynbo.

"If a massive star dies without making a supernova or a gamma ray burst, then we will not notice it. In future, such events will be detectable with gravitational wave detectors," Fynbo adds.