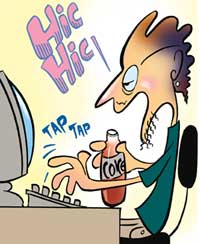 When you can't answer criticism make it appear complex or worse still, attenuate it. In the wake of the recent Centre for Science and Environment (cse) report on pesticides in soft drinks, cola majors and their friends in the media adopted both methods. Bollywood stars supported their paymasters. Shahrukh Khan was unequivocal. "If colas are banned in India, I would go outside the country to have them," he proclaimed. Another Bollywood star found this an occasion to denounce India for being "an unhealthy country". Colas were absolved though.

In a similar vein, journalist Tavleen Singh noted in the Indian Express that water in India is so unhealthy that "foreigners prefer soft drinks instead". In fact, the paper that prides itself on practicing "Journalism of courage" has become an ardent cola votary. "Three years ago, cse had highlighted the problem, which had set off a flurry of measures -- and, yes, calls for banning colas. But that realities have not changed indicates the complexity of the problem."

Complexity of the problem is a good escape route. But to be fair, some in the media have asked questions. The Times of India, for example, noted, "Their (cola's) plants contaminate soil and water. " But will the cola majors listen to such criticism?