Starve a child to repay a debt

External debt has proved an albatross around the neck of African nations. At least two-thirds of their total debt will have to be written off if they are to revive their economies 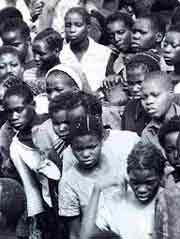 SUB-SAHARAN Africa's debts have increased three-fold since 1980 and the only prospect is that the arrears will mount as just half the scheduled payments are being met. Solutions being explored range from implementing the so-called Trinidad terms to creating a UN Economic Security Council (ESC), whose 11 permanent members would include India, Egypt, Nigeria and Brazil -- the most populated countries from four regions.

The Trinidad terms, which refer to an initiative proposed three years ago by British premier John Major, envisage a two-thirds reduction in part of the stock of debt of those low-income countries that accept adjustment programmes approved by the World Bank. The proposals, however, got bogged down following objections by the erstwhile Bush administration. But, with US President Bill Clinton's announcement that the US would write off half the debt of the 18 poorest countries in Africa, economic planners hope to revive the Trinidad terms.

The ESC proposal contained in the 1993 human development report of the UN Development Programme suggests supplementing the 11 permanent members, who would include the UN Security Council's five permanent members plus Germany and Japan, with 11 rotating members.

The urgency of solving the debt problem of African states is implicit in the question asked 20 years ago by then Tanzanian President Julius Nyerere, "Must we starve our children to pay our debts?" The response of the Group of Seven (G-7) nations can be gauged from the fact that child malnutrition now claims 4.5 million lives each year -- and the figure is rising.
So vicious is the spiral of economic and social decline fuelled by the foreign debt owed by African governments, mainly to the G-7 nations and institutions they control, such as the World Bank, that it has prompted UN secretary-general Boutros Boutros-Ghali to warn, "External debt is a millstone around the neck of Africa (and) easing the continent's debt burden must be a priority for the international community." Many African countries, it is estimated, will need 80-100 per cent write-offs if their prospect for economic recovery is to be realistic.

But the stark reality they face is that with the expiry in November of the enhanced structural adjustment facility of the International Monetary Fund, the main source of foreign funding for Africa, the likelihood is that G-7 financial assistance will shift to Russia and eastern European nations. Observers say such a shift is evident from the difference in conditions attached to IMF credit to Africa and to former Soviet bloc nations. IMF conditionalities for Africa involve crippling interest rates and credit controls aimed at achieving short-term, deflationary targets, whereas the measures imposed under instructions from the G-7 are expansionary and aimed at long-term recovery for the economies of Russia and its former allies.

That the only game in town has rules devised solely by the G-7 is proved by official announcements in Cairo last month that Egypt has won forgiveness of more than $3 billion of foreign debt after pledging to ease trade restrictions, privatise government-owned companies, reform its banking system and control its budget deficit. These conditionalities were imposed by the IMF and the World Bank, though market-oriented measures introduced two years by the Hosni Mubarak regime have not produced any real economic growth.

And, in Kenya, the government is hoping that pulling the shutters down late last month on the Exchange Bank, tainted by a $50 million scandal involving fraudulent exports of gold and diamond jewellery, will encourage the IMF and World Bank to resume balance of payments assistance, suspended in 1991. The government has also ordered an audit of four other banks, as requested by the IMF following reports that all four enjoyed undue patronage from high-ranking Kenyan officials.