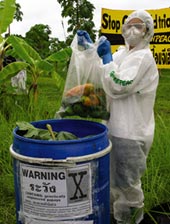 The recent revelation proves the futility of the ban imposed on field trials in 2001. The consequences of growing ge papaya in Thailand are serious. Not only is it the staple food, it is also grown everywhere. The agriculture department has filed property damage charges against Greenpeace South-east Asia, based in Bangkok. The department's chief Chakan Saengraksawong accused the the activists of disrupting a 10 year long government research.