States may get back CAMPA money 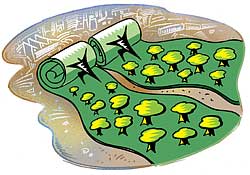 On March 13, a bill to increase the country's green cover received the union cabinet's approval. Rs 6,000 crore collected by the Compensatory Afforestation Management and Planning Authority (campa), a body appointed by the Union Ministry of Environment and Forests on the Supreme Court's directions, will finally be used if the bill receives the parliament's approval. campa was mandated by a 2002 Supreme Court judgement to collect compensation money from projects that divert forestland for non-forest use. But it has remained an ad hoc body.

The details of the bill are not known. But according to sources in the union government, it calls for the formation of a general body chaired by the minister of state for environment and forests and an implementing body headed by the director general (forests). A committee of independent professionals will oversee the work of the two bodies.The money collected so far will be placed in a public fund and given back to the states concerned. The interest from the Rs 6,000 crore would be divided between states who have not paid any money to campa so far. The states will use this money for a new project of the United Progressive Alliance government, the Green India Programme.

The bill might reassure the states. In 2002, when the Supreme Court ordered the formation of campa, the states had feared that a centrally-controlled agency would take charge of the money and spend it in another state (see 'Why states are against campa', Down To Earth, January 15, 2006).

The Central Empowered Committee (cec), the seven-member body, which advises the Supreme Court on forest related matters, refused to comment on the development. But in its report of January 2008, it had come up with a different recommendation. The agency had suggested that compensatory afforestation funds collected from states be channelled back to them through state-level societies. cec also suggested that the substantial interest from campa funds be used for now and the principal be reinvested. Money collected in future should be released every six months to the state-level societies, the cec had asked. But the cec report had also emphasized the need to make campa operational to oversee the transfer of funds to these state-level bodies.

The Supreme Court's advisory body is also not too enamoured of the idea to transfer funds to the Green India Programme. It had disapproved the idea in an ad hoc campa meeting in February 2007, saying that the funds were for natural regeneration and forest protection, not for plantation.

The exact nature of the Green India programme is, however, unknown. It plans to increase the green cover of the country by six million hectares. Some experts apprehend that this might just be done through monoculture plantations the quick and easy way of showing an increase in "forest" cover. But plantations have a history of not promoting biodiversity. "The Green India Programme could mean anything, perhaps even commercial plantations," says Kanchi Kohli of the Kalpavriksh Environment Action Group.

Other experts feel that the new bill will come up against the court's opposition. "It will have to be approved by the apex court at some point since the money is coming from an agency appointed on its directions", says Ritwick Dutta, an environmental lawyer.