As the country braces for drought, the government at the Centre has written to the states to start adopting contingency plans. Agriculture secretary Ashish Bahuguna is learnt to have written to state secretaries to be ready with their agricultural contingency plans and start implementing them. The Centre has also assured of its support in form of flexibility in funds.

“The state governments can reserve up to 10 per cent of their funds from Rashtriya Krishi Vikas Yojana (RKVY) and other agriculture schemes. This flexibility is to ensure enough funding for the contingency plans,” said an official from the agriculture ministry. He added that the provision will help state governments as a lot of last moment changes could be made based on how monsoon progresses.

Talking to Down to Earth, CRIDA principal scientist, Y G Prasad, said these contingency plans are technical documents prepared in consultation with state agriculture departments, state agricultural universities (SAUs) and krishi vigyan kendras (KVKs). ICAR had asked CRIDA to prepare a common template which was later filled in by the state governments and agricultural universities and revised and finalised by CRIDA. The contingency plans help the states to focus on preparedness for inputs, energy requirements and to dovetail budgetary support from various ongoing schemes.

Plan of action
The contingency plans comprise of two parts. Part one is information about the district, like soil, temperatures, average rainfall received and crops grown, and the second part has instructions on what to do in case there is delay in monsoon onset, breaks in monsoon leading to early, mid and late-season droughts, delayed or limited release of water for irrigation, floods, unseasonal rains and extreme weather events like heat wave, cold wave, frost, hailstorm and cyclone.

For monitoring purpose, CRIDA is the nodal agency which has divided the country into five regions and these regions are monitored by ICAR institutions. Each institution has some designated states under it for monitoring and guidance (see graphic 1). 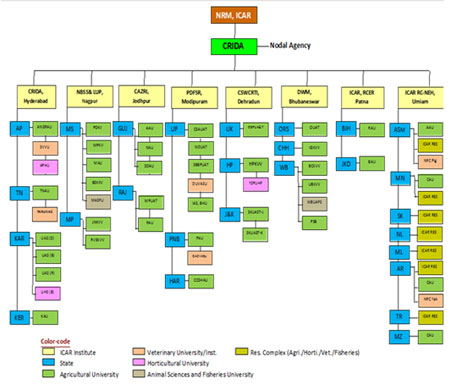 A pilot implementation of these plans by Department of Agriculture was also conducted in three states during the XIIth Plan. Also, real time implementation was taken up at 23 locations across India under All-India Coordinated Research Projects (AICRP) on dryland agriculture. Prasad said that plans were adopted by the state agriculture departments during delayed monsoon and deficit rainfall in 2012 and 2013 too.

Prasad added that with India Meteorological Department (IMD) predicting drought from April this year, ICAR and CRIDA has been in action since then. We are holding state-level consultations where officials from districts, KVKs and SAUs are being called and being trained on how to implement these contingency plans (see graphic 2). This includes recommending what kind of crop seed varieties to be used, what kind of seed treatment to be given and in-situ preparations. We have already held workshops in Karnataka, Gujarat, Rajasthan and Bihar. He added that the state governments have to take the final decisions. 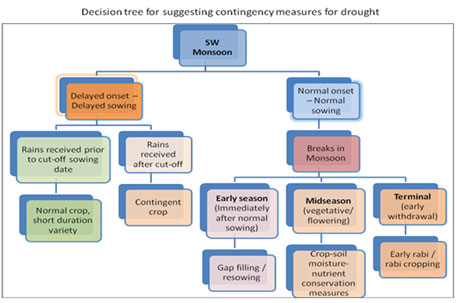