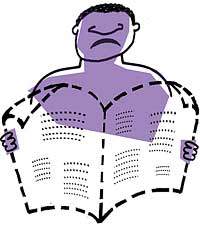 No news is good news, goes the proverb. The people of Guinea-Bissau disagree. The nation of 1.6 million people in West Africa has gone without newspapers for almost two months because of a paper crisis. "Printing-houses don't have paper," Atizar Mendes, director of the weekly Ultima Hora, told the news agency AFP.

Guinea-Bissau has only five publications, but none of them is now able to print. Simao Abina at the government newspaper No Pintcha confirmed the news, or lack of news, with a simple statement. "We have ceased to exist since last December," he said.

The paper used to come from the Netherlands, an official at the national printing works explained. "But the type of paper we use is no longer available in the Dutch market and we no longer have the resources to buy it from elsewhere," Abina said.