Steel manufacturer in the dock

Prompted by protests, the Maharashtra government is considering action against a steel manufacturing unit for causing water pollution. 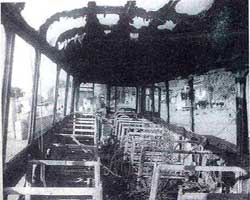 THE MAHARASHTRA government is planning to take action against Nippon Denro Ispat Limited (NDIL), one of the largest steel manufacturing concerns in the country, for causing water pollution.

The Rs 300-crore NDIL plant, located in Kalmeshwar town near Nagpur, was commissioned in 1985 and uses hydrochloric acid in its manufacturing process. Kalmeshwar residents allege the effluent from the plant has contaminated well water in the town and a nearby canal. The residents say the water has a reddish tinge and tastes bad.

Since 1988, the residents, led by the Paryavaran Sanrakshan Samiti, have been conducting a sustained campaign against NDIL. The Samiti is run by the Bhabha Vigyan Lokshikshah Sanstha, which is propagating scientific awareness among the people of the town.

The people persuaded institutions such as the public health department, the pollution control board and the National Environmental Engineering Research Institute to study the water. The study reports have established that the levels of chloride and suspended solids in the water were higher than permissible limits.

Kalmeshwar's residents continued with the protests, which finally resulted in a meeting of the officials of the government departments concerned, representatives of the municipal council and NDIL on November 30. It was decided at the meeting to set up a committee to monitor the water. Though NDIL denied responsibility for the well water contamination, it agreed to dewater the wells, remove the contaminated sludge from the canal and improve its effluent treatment system.

Meanwhile, the Samiti, backed by all political parties, mobilised the people for an agitation on December 13. The protest went out of control when the agitators began pelting stones on police and NDIL vehicles. In the resulting firing by police, an onlooker was killed and two people were injured.

The next day, state urban development minister Arun Gujarati said in the legislature that action against the unit is being considered under the Environment Protection Act and the Maharashtra pollution control board's Water Act.

Dismissing the allegations of pollution, NDIL's environmental consultant P M Thergaonkar said the company had spent Rs 40 lakh on a foolproof pollution control and effluent treatment system, which no other company had done. Claims Tushar Chattopadhyay, NDIL vice-president (projects), "Our effluent treatment system is highly sophisticated and based on advanced technology." Besides, he says, it is to be upgraded by May 1994.

Chattopadhyay admits that during the monsoon, there is an overflow of treated effluents from solar ponds in which they stored to be exposed to sunlight and broken down further. However, Kalmeshwar residents say the ponds were added to the effluent treatment plant only after the inadequately treated effluents had been released into the canal.

Responding to the reports of the high chloride level in the water, Thergaonkar claims it is not a long-term health hazard. He argues that the residents have been unable to pinpoint a single instance of the contaminated water having harmed humans or cattle.

If NDIL is found to have polluted the water, it could be prosecuted, have its water and electricity supply cut off, asked to stop production until satisfactory pollution control measures have been taken or be closed down.

The Samiti, having tasted victory in this agitation, has resolved to sustain its campaign for a pollution-free town.