Steering out of gas

A global oil crisis is just a decade away, warn geologists 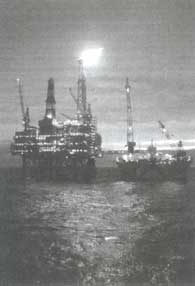 WITHIN 10 years, the world will begin to run out of its principal fuel - oil. We are rapidly approaching the point where global output of oil will begin to contract while the demand for petro-energy products will rise sharply.

Oil industry executives and energy planners have reached the consensus that between 2005 and 2010, a surge in world demand will surpass the supply of conventional oil energy. This will be followed by an abrupt decrease in the real volume of output even as demand goes a bit higher. The oil crunches created by the supply cutoffs and soaring prices in 1973 and 1979 will seem insignificant.

As of January this year, there were 1,020 billion barrels of oil in "proved" reserves around the world. At the current rate of production - 23.6 billion barrels a year, world supplies will not last for more than 43 years. Ninety per cent of the globe's oilfields have already been tapped and many are already exhausted. And no new fields exist to bail us out. Also, it is increasingly hard to pump out oil once an oilfield reaches the midpoint in its productive cycle.

Even the official industry estimates of "proved" oil reserves have been wildly exaggerated by many members of the Organisation of Petroleum Export* ing Countries (OPEC). Furthermore, consumption of petro-energy products has already jumped by 50 per cent in Asia and by a third in Latin America. By the estimated peak production year of 2010, world demand will have risen by more than 60 per cent to as much as 40 billion barrels per year.

In November, 1997, two top oil geologists, Colin Campbell and Jean Laherrere, presented papers on the impending oil depletion to a conference of the International Energy Agency (TEA) of the United Nations in Paris. They managed to convince the IEA that their age-old policy - the higher the price, the more oil one finds - was wrong. They are of the view that by 2010 and 2020 the oil crisis will be upon us in fullblast. In March this year, the IEA presented its own paper based on the Campbell-Laherrere analysis at the Group of Eight summit in Moscow.

Since them, others have joined the debate. Franco Bernabe, chief executive of the Italian oil company ENI spa, predicted an oil crisis by 2000 and 2005. He also forecast that today's world price for a barre! of oil will soon begin to rise from its $15 base and quickly pass the $30 mark which so disrupted the world in the 1970s.

The problem is there is no substitute for oil. Energy from hydrocarbon sources (oil, coal, wood) accounts for 80 per cent of what makes our world go. But it is oil, which accounts for 38 per cent of all energy used. Most analysts agree that our ability to replace the energy units lost from declining oil reserves by chopping down trees or digging for more coal ended more than a decade ago.

Projects to build fast-breeder nuclear reactors or to wrench oil from shale deposits have mostly been cancelled by government funding cuts. Some sources, solar and wind in particular, if fully exploited would, on an official us estimate, provide the energy needs of only 100 million of America's population of 260 million. Against this background, the bigger the major oil producers become, the longer they can hold out against the gathering gloom.

Soon the fight will be over the dwindling petro-reserves themselves. The so-called winners: nations rich in oil and strong in resolve will get their energy fix. America will thrive and so will Britain and South Africa. Other European Union members will fare according to their ability to command and pay for it.

Much of the social safetynet that defines the industrial West will be at risk. The losers: Russia is on the verge of a collapse. Japan is adrift. Even nations which have oil - Indonesia and Nigeria, for instance - must learn how to control it. And political instability should not ruin West Asia's possessions.

It is the poor, poverty-ridden nations like China, India and Pakistan which will suffer. They can only be invigorated only with a massive dose of ever more and even cheaper raw energy. The struggle for national prosperity fuelled by energy is bound to throw the economy out of gear. Their survival is the stake.