Still a source of wonder for some, no great shakes for others, the recent total solar eclipse was a memorable spectacle 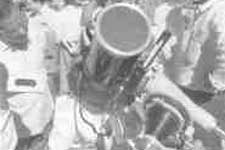 THE sun and the moon came together yet again on October 24, 1995, after I long years, in a dazzling display of cele tial reunion. Earthlings watched - awestruck and spellbound. But which the sociocultural significance of th event was well marked, scientists kel their fingers crossed over any new sc ence that might emerge out of this cele! tial rendezvous.

Innumerable watchers, including 3 Japanese and 26 American scientist arrayed themselves at different points along the 40-krn wide path of totality - region in which the sun is completely masked by the moon's shadow. "Essentially," explained Ramnath Cowsik of the Bangalore-based Indian Institute of Astrophysic and the man behind the entire scientific endeavour, 'the experiments con- ducted during the eclipse had two objectives. One - to demystify the tew remaining mysteries of the sun, and two - to seek a better understanding of the complex relationship between the sun and dw earth."

The corona - the fiery halo enveloping the sun but visible only durag total solar eclipse - was the cynosure of scientific eyes. That it is a million 4kgrees hotter than the sun itself has bdfled scientists for long. One explananon is that magnetic fields intruding veto the corona get warped releasing pmerous amounts of heat. So, scientists wwd to look for optical signatures of mrtain elements like iron and calcium *a signify very high temperatures. The nce of these elements can then be prese elated to the magnetic fields theory.

Another solar oddity that attracted tion was the dust rings, supposedly nts of dead comets swept towards 'th by the sun. The rings, predicted long ago, had remained elusive so far.

This was also the first time that a detailed study of atmospheric solar 'winds' was conducted. Solar winds are magnetic fields that emanate from the sun and cause the famous phenomenon of Northern Lights. Sometimes they come so close to the earth's surface that they disrupt the power supply networks.

Redefining the sun's radius is a regular during a total solar eclipse. This time scientists from NASA and the Pune based Inter University Centre for Astronomy and Astrophysics (IUCAA), set themselves up near Agra to measure the solar diameter and its long-term variations. The results are already out: the sun's new radius is 650 kin longer than hitherto measured - 6,96,000 kin disclosed N C Rana of IUCAA.

- At Diamond Harbour, Calcutta, sci- entists from the Saha Institute of Nuclear Physics set up experiments to detect electrical charge and mass of cosmic rays. Other than being just protons and neutrons, cosmic rays are heavier particles which disintegrate while reachthe earth. A total solar eclipse is a riginique opportunity to detect cosmic ray articles because the sun is masked temorarily.

Delhi University and the National 'hysical Laboratory (NPL) scientists ought gravity waves in the cosmic clut2r showered on the earth. Postulated ut never identified, these supposedly lay a major role in the circulation of -iiddle and upper atmosphere.

Another NPL team studied changes -1 radio waves intensity received from 11 India Radio and other sources at Neem Ka Th4na and Diamond Harbour. The observations, the scientists say, will help plan India's transmission networks better. They also studied the variation in the intensity of visible, infra-red and near infra-red rays. According to them, the purpose of the experment was to gauge the aerosol content in the atmosphere which has a cooling effect on the latter.

The star attraction during the eclipse was an MIG aircraft chasing the moon's shadow over the entire line of totality in India, flying at an altitude of 22 km. It photographed the moving lunar shadow as well as the corona. This exercise was carried out for the first time in India.

The results of all these endeavours, however, would only show up after some months.

Despite academic efforts, many scientists were sceptical of any remarkable finding coming out of this event Remarked R K Kochhar of the iiA "We've come a long way from the total solar eclipse of May 29, 1919, when Einstein's General Theory of Relativity was experimentally proven. The total solar eclipse is a horse that has been flogged ad nauseam." If nothing, as Cowsik remarked, the academic exercise will surely yield at least 20 to 30 Ph.D theses.