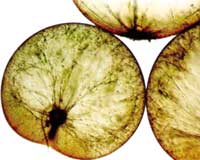 harmful growth of algae that affects the marine ecosystem especially fish, human health and tourism can be controlled using a safe biological weapon, claim researchers. The scientists from the Indian Statistical Institute and the Ramakrishna Mission Vivekananda Centenary College, both in Kolkata, and the Institute for Environmental Systems Research at the University of Osnabrueck, Germany, found two free-floating, toxin-producing single-celled plants (phytoplankton) that can check algal blooms and also the harmful growth of a tiny marine organism.

"As both the phytoplanktons naturally occur in the marine environment, they do not pose any threat to other marine plants and animals," points out lead researcher Joydev Chattopadhyay. "This biological control agent could control localised outbreaks of algal blooms known as red tides," he adds. Algal blooms are a matter of concern for India where the livelihood of almost 10 million people is linked to the sea.The findings of the study were published in a recent issue of the journal Biosystems (Vol 80, No 1).

The researchers conducted field experiments on the coastal seawater from Talsari, Orissa to Digha Mohana, West Bengal. They studied the role of Noctiluca scintillans, Chaetoceros sp (algae) and Paracalanus sp, a zooplankton. The study showed that Noctiluca scintillans secretes a toxin that controls its own bloom as well as that of Paracalanus sp. Chaetoceros sp, on the other hand, chokes Paracalanus sp reducing its growth. "This biological control agent is better than viral control agent, which instead of bringing an end to algal bloom could unexpectedly spell catastrophe for marine ecosystem," Chattopadhyay claims.