Developed countries are slowly but surely pushing everyone to get on board the climate-pledge boat. The US, the EU and Australia called on the developing countries to step up their ambition to urgently limit the increase in temperature rise due to climate change to 2°C. They have accused many developing countries of not having submitted any pledges so far under the decisions taken at the Cancun climate negotiations in 2010. The US specifically picked on 28 developing countries: their income levels are comparable to the poorer lot of the developed country parties that have undertaken mitigation actions.

The workshop on increasing ambition was held under the Ad hoc working group on the Durban Platform for Enhanced Action or ADP track, which is mandated with the task of addressing the lack of ambition in the 2020 pledges made by countries to contain temperature increase to 2°C. Negotiations are simultaneously on under two other tracks—Long-term Cooperative Action (LCA) and Kyoto Protocol (KP). 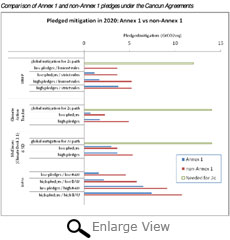 The submission of pledges by the 28 countries singled out was one of the options that featured in a long list of actions put forth by the developed countries to increase the level of ambition needed to close the gap that presently exists between what has been pledged and what is needed to stay on the 2°C course. To ensure that the urgency of the situation is duly addressed, parties felt that all options in the basket need to be considered. These include phasing out fossil fuel subsidies, low emission development strategies and REDD plus (programme to strengthen and expand the role of forests as carbon pools), all of them requiring substantial part on part of the developing countries.

Developed and developing countries have so far not been able to reconcile their differences over the West's historical responsibility for greenhouse gas emissions. This is a major roadblock in the way of developing a new framework for climate mitigation action post 2020 at the ongoing climate talks at Bonn in Germany.

The other options discussed to raise the ambition levels of all member countries included reducing subsidies to fossil fuels and taking forward what was agreed at an earlier Group of 20 (G20) meeting of finance ministers and central bank governors of 20 major economies at France in 2011. The indispensable role of renewable energy in achieving mitigation targets was discussed by a lead scientist from the Intergovernmental Panel on Climate Change and by the delegates from developed countries. They said that in order to avoid much higher mitigation costs in the future—for every dollar not spent now, $4.3 will have to be invested post-2020—and to prevent investments from getting locked into into carbon-intensive technologies, investments need to be made now.

But then funds promised to developing countries in order to make such large-scale transition to clean technologies are yet to be delivered. Promises regarding technology transfer and capacity building, too, have not been met. According to China, developed country parties need to take the lead and it is very important they set the example for the rest of the world.

Increasing levels of ambition cannot be addressed just for mitigation but for adaptation as well, parties said.