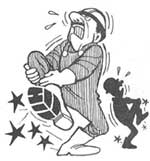 The multinational Hindustan Lever Ltd. (HLL) is facing the music from its employees for allegedly, issuing boots containing carcinogenic materials. In a legal notice served in January this year, employees of the Bombay unit of HLL demanded Rs 9 lakh as compensation to all workers who developed serious skin problems after using gumboots and sandals provided by, the management every year before the monsoon.

Last year, when employees complained of a foul smell from the boots, the factory doctor recommended washing the boots with detergent powder. The petitioners claim the boots were smelling of nitrobenzoyl, a highly carcinogenic chemical.

Alarmed when they developed blisters on soles and peeling skin, about 40 affected workers rushed to the department of dermatology at Sion Hospital in Bombay. The head of the department, H R Jerajani, stated in his report that the workers had full-blown contact dermatitis due to the boots they were wearing. According to another senior doctor at the hospital, the workers had a high risk of contracting skin cancer if they had continued to use the boots.