Wounds will heal up with far less pain as an adhesive will be used to seal up lacerations, making stitching unnecessary 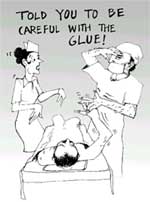 the painful process of stitching wounds could be done away with as James Quinn and his team at the Emergency Medicine Department, University of Michigan, Ann Arbor, have come up with an adhesive that can close up deep wounds. The researchers say that the procedure of gluing is painless, fast, and as good as a suture with a monofilament widely used to stitch wounds. Even plastic surgeons fail to differentiate between lacerations closed up by the glue from those that were stitched ( Journal of American Medical Association , Vol 277, No 19).

The conventional way to tackle wounds involves the long and painful ordeal of sewing the wounds and removing the stitches after a few days. In view of the painful experience, there have been attempts in the past to develop adhesives for healing wounds. The first group of adhesives - the cyanoacrylates - were tried out in humans several years ago. But the chemical adhesives had several drawbacks.The glues were only effective on shallow wounds and led to toxic reactions on the skin. There was also a fear that some such chemicals were carcinogenic. Subsequent research established that at least the cancer scare was unfounded.

The chemical adhesive used by Quinn and his team is known as octylcyanoacrylate (Dermabond), a cyanoacrylate manufactured by Ethicon Inc. Summerville, New Jersey. The researchers studied 130 adults with 136 lacerations on the face, torso, arms and legs that were treated in the emergency room of Ottawa General Hospital, Canada. Half the wounds were closed with the adhesive and the other half with stitches. Deep wounds that normally required two layers of stitches were given stitches beneath the skin and then randomly assigned to be closed with either the glue or the stitches on the surface.

Though the wounds in each group healed equally well, the glue had advantages over stitches. It closed the wounds in about 3.6 minutes, as compared to about 12 minutes when stitched. More importantly, the glue was significantly less painful. Doctors predict that this method will replace the stitches for about one third of the 11 million wounds treated in hospital emergencies in the us.

The researchers say that in addition to injuries needing immediate attention, these adhesives could replace stitches and staples in closing up surgical wounds as well. Another study using Dermabond showed that the glue is as good as stitches for head and neck injuries and for wide ranging surgical procedures in cancer, thyroidectomies, and even biopsies. The method is cheaper compared to stitching and can be used by any physician practising in remote areas with minimal training.

However, precautions have to be taken. This glue is meant to be applied on the top of the wound's edges while the edges are held together by fingers. Many of the earlier attempts at applying the glue failed because doctors mistakenly put it between the edges, says Quinn. If the glue gets into the wound, if can interfere with the healing, promote infection and may even result in an ugly scar due to improper healing.

There are a few limitations to the use of the chemical adhesives as compared to the stitches. For one thing, they cannot be used on hands, feet or joints as the continuous movement of the limbs can cause the glue to peel off from the skin surface. Also, frequent washing - as in the case of hands - can also wash it off, although the coating can withstand the daily shower. The glue is waiting the approval from the us Food and Drug Administration. Once approved, Dermabond could well replace stitches - and trauma - in millions of patients.