Still in the bind 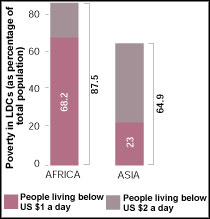 See more graphs
• The total number of people living on less than US $1 a day in the LDCs during 1995-99 was 307 million. Total population of the LDCs is 613 million


The business of trade, debts and aid
• More than one third of the LDCs saw a sharp decline in their trade between 1997-2000

• The North is oil hungry. No wonder just four oil-exporting countries, inc;uding Sudan, got more than 50 per cent of the total investment made by the North in LDCs. Rest 45 countries got a raw deal

• Last year Malawi had to sell its stock of food to repay international debts. When famine hit the country this year, it had to seek more aid and debt. Short selling their natural resources is the only way out for many of the LDCs