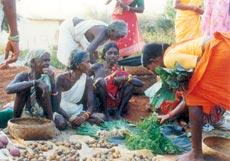 seven years after it was enforced, the Panchayat (Extension To Scheduled Areas) Act (pesa), 1996 -- the legislation that was meant to vest tribals with wide-ranging powers in scheduled areas -- has failed to produce the desired effect.

New Delhi-based non-governmental organisation (ngo) Enviro-Legal Defence Firm (eldf) came to this conclusion after evaluating the implementation of pesa in four states: Madhya Pradesh, Gujarat, Rajasthan and Himachal Pradesh. While the study was conducted in December 2002, its report was released in July 2003.

The 73rd Amendment to the Constitution and its subsequent extension to fifth schedule areas through pesa were an attempt by policymakers to grant legislative powers to panchayati raj institutions. In this context, pesa was particularly significant since it sought to empower gram sabhas in scheduled areas. "This is seen as its main advantage. At the same time, the complete absence of operational rules to give effect to the provisions of the act is its main disadvantage," laments Sanjay Upadhyaya of eldf. Consequently, though 72 per cent of the Rs 52,000-crore worth of minor forest produce (mfp) in India comes from scheduled areas, yet the local communities inhabiting them hardly have any perceptible rights over their natural resources.

"The biggest hurdle to the implementation of pesa is the state governments' lack of understanding of its mandate. The research has also evoked a common response across the four states -- that of lack of political will," points out Upadhyaya.

These apart, the assessment has highlighted inherent loopholes in the law. For instance, the clause that confers on the gram sabha the exclusive authority to approve development projects does not mention the fallout from the rejection of these programmes. The recommendatory powers of gram sabhas to acquire land for various projects are suspect as well since village bodies are required to be merely "consulted", not give their consent.

Even as gram sabhas are empowered to identify beneficiaries for poverty alleviation schemes, no guidelines have been set for the selection of the likely recipients. So far as the ownership of mfp is concerned, this appears to be the prerogative of the local areas of the panchayat under a gram sabha . The report also notes that there needs to be a clear understanding of the nature and extent of powers to be granted to the gram sabha and various tiers of panchayats for the prevention of land alienation.

Among the solutions suggested in the report are the need for a simple legal regime and a bottom-up approach to law, the putting into effect of operational rules, and clarity in allocation of powers. For its part, the Union government remains largely non-committal. "The government has no power to enforce pesa, but can monitor the states' efforts to facilitate the involvement of the civil society and private sector," says Amarjeet Ahuja, joint secretary, Union ministry of rural development.