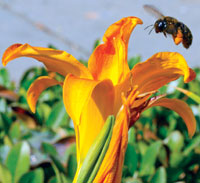 BUMBLEBEES carry out nearly 80 per cent of the pollination done by insects. However, just like honey bees, they too are becoming a victim of extensive pesticide use in agriculture. A study published in Nature on October 21 suggests the chemicals affect the insect’s ability to forage.

The study found that pesticides lead to an increased worker mortality, causing a significant reduction in brood development and colony success. Researchers led by Richard Gill of the School of Biological Sciences of University of London, investigated the effects of two insecticides, imidacloprid and λ-cyhalothrin, on bumblebee colonies over four weeks. They also tagged the insects with microchips to study the effect of pesticides on foraging activity of individual bees.

Researchers say the existing methods for testing pesticides on bees are insufficient as they study the bee behavior for only 96 hours after exposure to pesticides and do not take the impact of pesticide combinations into account. This needs to be rectified, they say. In a related commentary in Nature, Juliet Osborne of the Environment and Sustainability Institute at University of Exeter in the UK says the study highlights the importance of including bumblebees in agrochemical risk assessments. They can provide a novel opportunity for pesticide insect interaction studies as these insects live in very small colonies of a queen and four workers on an average.