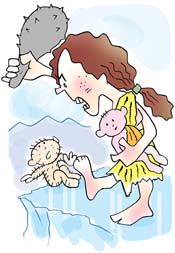 why are humans the only primates without fur? The answer, new research suggests, could be the rampant practice of infanticide among stone-age women, who killed their furry children and reared only those born 'beautiful'. A paper by Judith Rich Harris, author of The Nurture Assumption and No Two Alike, was awarded the 2006 David Horrobin Prize for medical theory by the publication Medical Hypotheses.

According to Harris, natural selection was not the only process that governed evolution of man. "Instead, the results of sexual selection combined with a third, previously unrecognised, process: parental selection. The use of infanticide as a method of birth control in pre-modern societies gave parents, in particular mothers, the power to influence the course of human evolution by deciding whether to keep or abandon a newborn," she says. "Once the mother had held the infant to nurse, the decision had already been made," she adds. Two characteristics that made pre-historic mothers decide whether or not to keep their babies were skin colour and hairiness, she postulates, citing examples of the African hunter-gatherer women of the Kung tribe.

"Many theories have been floated to say that Homo sapiens are the only ones lacking a protective coat of fur. Most of these theories are attempts to explain our loss of hair on a survival-of-the-fittest basis; the idea is that hairlessness somehow increased our fitness in the hot and sunny climate of Africa in which our species emerged," she notes. "But other mammals of similar size--baboons, chimpanzees, gorillas, impalas, gazelles, hyenas, leopards, cheetahs--have managed to survive well in Africa despite being covered with fur," she contends.

Harris maintains that early paintings and exhibits of human evolution from hairy to hairless are misleading and that Homo sapiens, perhaps along with its immediate predecessor, were the only naked primates in our evolutionary line. "I propose that Homo erectus and its northern descendant, Neanderthals, were as furry as any other ape," she writes.

"The question," she says, "is not whether Neanderthals had fire but whether they had the needle or whether they could sew." A deerskin slung over the shoulders would have been inadequate protection against ice-age chill. According to her, mammals that made it through the ice-age, the mammoth, for instance, were furry. Therefore, some force other than selection on just fitness, may have been responsible for our hairlessness, she says.

"That force, I believe, was culture. Parental selection could have eliminated hairiness quickly. Any infant born too hairy would have elicited an "ugh"; in all likelihood, it would have been killed or abandoned at birth," she says.