As some Indian goats have an unique genetic make-up 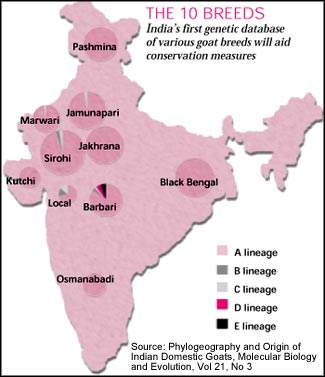 the barbari goats of Madhya Pradesh belong to a rare breed and they possess genes that are not found elsewhere in the world. These are the findings of an analysis conducted by scientists from Hyderabad's Centre for Cellular and Molecular Biology (ccmb).

The main aim of the analysis was to create the first genetic database of the various goat varieties found in India. The ccmb researchers analysed the mitochondrial dna of 363 goats belonging to 10 breeds that are found in four different agroclimatic conditions. The dna found in the mitochondria -- the powerhouses of the living cells -- seldom changes over the generations, making it is an important tool to study the genetic diversity of living organisms.

The researchers found that in addition to sharing the a, b and c lineages (ancestry) that are commonly found in different parts of the world, Barbari goats possess two additional lineages (d and e). On the whole, Indian goats have 200 different haplotypes (groups) -- a sign of enormous genetic diversity (see map: The 10...). The findings highlight the importance of preserving the gene pool of the animals. India is estimated to have 123 million goats belonging to 20 breeds. They account for 20 per cent of the world's goat population.