Stopping cholera with a sari 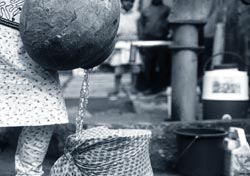 use of old saris to filter drinking water has halved the number of cholera cases in remote Bangladeshi villages. The saris help decrease cholera cases as effectively as the expensive nylon filters supplied by the World Health Organization.

These are the findings of a three-year long study conducted by researchers from us-based National Science Foundation. "Many lives can be saved by this cheap and simple way," says Rita Colwell, the lead researcher.

Cholera causes acute diarrhoea. The illness is endemic to impoverished regions of Asia, sub-Saharan Africa and South America. In Bangladesh, people are forced to drink cholera-contaminated surface water because most wells have high concentration of arsenic.

Any finely woven fabric proves to be an effective filter. The researchers found the effect was optimum when the sari was folded and the water passed through four layers of cloth. In laboratory tests, this removed more than 99 per cent of the cholera-causing bacteria Vibrio cholerae. The bacteria themselves are tiny, but they cling to plankton that are too big to pass through the pores of the fabric. Old clothes were found to be more effective than new ones, as their fibres had got worn, making the pores smaller.

Also encouraging, says Colwell, was the villagers' response to the educational programme. Once they saw the bacteria in untreated water, they quickly realised the importance of filtering.