Tornadoes form due to electricity produced by nanostructures 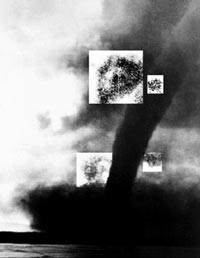 russian researchers have evolved a new theory on how tornadoes form. They claim that nanoscale structures of thunderstorms produce a rapid electricity charge, sending the storms into a spin, and thereby forming tornadoes.

Twisters, as tornadoes are often called, are nature's fiercest storms, leading to thousands of deaths every year across the world. How they arise is still not well established. But scientists are sure about some facts -- twisters can form during different types of storms, but they usually stem from powerful thunderstorms. They develop where warm, moist air and cold, dry air meet and begin to create updrafts. In these updrafts, winds that often move parallel to each other in a shearing motion transform into a spinning column of air called a vortex; when this vortex becomes starkly visible as a funnel of clouds and reaches the ground, it is termed as a tornado.

But some thunderclouds produce tornadoes while others don't. The 'wind explanation' does not account for this difference, assert researchers from the Russian Research Centre Kurchatov Institute, Moscow. In their paper, published on the arXiv website on April 12, 2004, they suggest that electricity plays a major role in the formation of the fiercest storms.

To prove their supposition, they analysed high-resolution x-ray and visual images of tornadoes made available by the us National Oceanic and Atmospheric Administration.

Their investigation shows that the difference between tornadic and non-tornadic thunderclouds is determined by the transport properties or rather by the very presence of an internal 'skeleton', which is composed of nanodust particles (carbon nanotubes or similar structures of other chemical elements). The nanodust of a tornadic storm generates electricity. This electric charge initiates a sort of electric 'crash' between the thunderclouds and the ground, and during this process, heat from the charge is transformed into gases and plasma moving chaotically inside the cloud. This leads to the formation of a vortex, which ultimately metamorphoses into a tornado.

The findings, if ascertained, could help improve the forecast of tornadoes. But some experts say the research is "clutching at straws". "One doubts whether the scale of the process leading to tornado formation is as small as suggested," asserts Andrew Watson, regional director of the Bureau of Meteorology, South Australia. According to him, air into the updraft of a cloud is drawn from a few kilometres around. Although a tornado itself is smaller than this, it is still bigger than a cluster of nanodust. Watson questions the use of still images to study the origin of tornadoes, as dust and debris picked up by the tornado could change its appearance dramatically while swirling. "It is dangerous to draw conclusions based on a small collection of photographs," concludes Watson.