Magnetic fields are able to unbend the space-time continuum 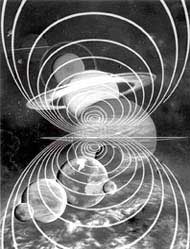 magnetic fields in space can straighten out any bending of space-time caused by gravity, shows new research.

Ever since Einstein formulated his general theory of relativity, almost a century ago, it has been known that gravity bends space-time. But now, a scientist has shown how magnetic fields in space can straighten out the bend in space-time caused by gravity. This surprising result may have enormous consequences on our understanding of the early universe and its genesis.

Einstein's theory of gravitation treats space and time as one continuum on which the universe exists. The continuum can be thought of as a rubber sheet, in four dimensions, that can be distorted by very intense gravitational fields as for example generated by dense objects like black holes. The Sun (like any other mass) also bends space-time as it passes close to the limb of the Sun. Einstein's theory is remarkably successful in explaining all the known gravitational phenomenon in the universe. The universe is full of magnetic fields. The Sun, the Earth and many stars and galaxies have magnetic fields around them. Astronomers have inferred the magnetic fields of stars and galaxies indirectly. The origin of these fields is still a matter of debate but cosmologists think that the magnetic fields in the early universe (when the universe was much younger and smaller) were much stronger than those observed today. Indeed, they could have been about 1,000 times stronger than those that exist in our galaxy. Even then, compared with the other forces the magnetic fields were assumed to be too weak to have any significant influence on space-time.

Now, C G Tsagas, researcher at the University of Portsmouth, in the uk , has incorporated magnetic fields into the equations of general relativity relevant to the earliest epochs of our universe. He uses the full theory of relativity without any approximations and because of the simplicity of the equations, has been able to solve them. He finds that when the space-time bends in response to matter, the magnetic field lines push back and try and flatten the space-time. This 'magnetocurvature' effect is more pronounced when the bending of the space-time is large. Thus in the early universe or near black holes and other dense objects, even a weak magnetic field will be able to effect the curvature of space-time.

This will have significant consequences on how the universe evolved. According to one of the more favoured theories the universe experienced a rapid period of expansion in the beginning after the big bang. This expansion, called inflation has been able to provide solutions to many conundrums faced by the standard big bang theory and hence in one form or the other is preferred by cosmologists.

Tsagas's work suggests that at least in some of these models, the universe may not grow enough if magnetic fields are taken into account. Another prediction of Einstein's theory is the existence of gravitational waves that are basically ripples in the fabric of space-time. If magnetic fields are taken into account, the strength of these waves will reduce. Though the planned gravitational wave detectors will not be able to see this effect, future detectors might be able to detect it. What is really surprising about this work is that no one noticed this simple and fundamental fact before even though general relativity plays a major role in our view of space-time. With this work, we may now claim that we understand our universe somewhat better at a fundamental level ( Physical Review Letters , Vol 86, p5421).