The need of the day to save biodiversity 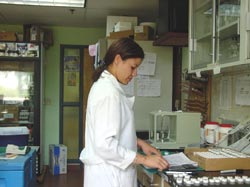 pharmaceutical giants ought to work closely with scientists in developing nations to ensure that these countries also benefit from the exploitation of their natural resources; such an approach is even crucial to ensure local communities' participation in the conservation process. These are the conclusions drawn by researchers from Panama-based International Cooperative Biodiversity Group (icbg) at the end of the first phase of their project 'Ecologically guided bioprospecting in Panama'. The project is aimed at finding as well as developing new drugs to treat numerous diseases, including cancer and aids. It is unique -- local communities and scientists for the first time have been given an opportunity to work in tandem with researchers in the drug-development process. Conventionally, pharmaceutical companies get dried plant tissues from botanists and then make the drugs on their own.

During the first five years of their project, the icbg researchers observed that the first step towards linking conservation with economic benefits is to ensure that local communities receive 'immediate benefits' from the use of their biodiversity, rather than waiting for royalties that are often not handed over. They also found that it was more economical to work in collaboration with the local scientists -- by just spending us $500,000 per annum for four years, they were able to obtain patents on three plant extracts that are effective against the leishmaniasis-causing parasite. The amount is peanuts compared to the us $43 billion spent annually by the worldwide pharmaceutical industry on research to develop new drugs. About one-third of this us $43 billion is spent on research that could be easily conducted in developing countries.

According to the researchers, if only a fraction of the research is undertaken in the developing world, then it could generate endless education and employment opportunities -- thanks to the project, 20 Panamanians got a Bachelors of Science degree, a dozen started pursuing post-graduation in botany, chemistry or pharmacology, and one has got enrolled for a doctorate in natural products chemistry. Additionally, many new technologies have been introduced in the region, scientific infrastructure worth us $500,000 has been put in place and more than 70 local scientists have got well-paying jobs.

Jeffrey McNeeley, chief scientist of the Switzerland-based World Conservation Union, praises the project as "an excellent first step". But he asserts that much more is needed, such as scholarships to develop graduate-level expertise and compensation for the use of ancestral knowledge to discover potential drugs. According to Phyllis Coley, the lead researcher of the project, if the Panamanian model were to be replicated in 28 biodiversity hotspots, it would only cost us $20 million annually to find new drugs. The sum is less than 0.01 per cent of the spending of the industry. The companies would benefit in other ways also -- involving the 'source countries' in the research process means the companies would be viewed as collaborators and not as 'biopirates'; they would thus get more access to the natural resources. "In our view, all the players will gain. Most importantly, the biodiversity would be conserved," concludes Coley.