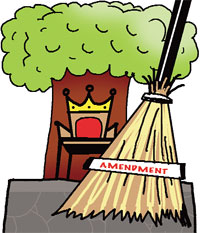 THE Union ministry of panchayati raj has suggested amendments to streamline local governance in the tribal areas of north-eastern states.

The draft amendments to existing laws governing local bodies in the Sixth Schedule areas would help fight insurgency prevailing in the region and effectively implement Central government programmes, such as the National Rural Employment Guarantee Scheme, at the grassroots level, ministry officials said.

Instead of amending the Constitution the ministry has now suggested amending laws to make local bodies more powerful and independent. “An amendment to the Constitution would be an external imposition,” said Hrushikesh Panda, additional secretary in the ministry. “These amendments are an attempt to make the process of decentralisation inclusive rather than imposing laws,” Panda said. The amendment is also to avoid opposition from tribals who have so far enjoyed certain autonomous powers, he added. But dissent seems inevitable.

Secretary of Khasi Hills District Council, W Syiemlieh, said the Sixth Schedule was inserted in the Constitution to protect the distinct identity, customs and culture of tribals in this region. Any change would be against the Constitution, he said.

Tribal areas of Assam, Meghalaya, Mizoram, Manipur, Nagaland and Tripura follow their traditional way of governance and enjoy a greater autonomy than other regions where panchayati institutions are in place. For instance, local bodies in Sixth Schedule areas have judicial powers to decide dispute as per their customary laws. They also have the the power to decide “any matter relating to village or town administration, including village or town police and public health and sanitation; the appointment or succession of chiefs or headman; the inheritance of property; marriage and divorce and other social customs”, as per the Constitution.

Panda and a team of officials from the ministries of home affairs, panchayati raj, urban development and development of north eastern region recently visited several areas in the Northeast to gather public opinion on the draft amendments. Panda said there is not enough effective local governance in the region—neither in the Sixth Schedule nor in non-schedule areas.

North-eastern states have a two-tier system of local governance. One, village council at the grassroots level formed by representatives from each tribal clan in the village as per customary laws. Two, autonomous district councils (ADCs) which comprise elected members from the autonomous district designated by the state governor. But this is not uniform across the region, said Panda.

Assam and Meghalaya do not have village councils, whereas Nagaland has no ADC. Women’s participation in the governance process is poor. Mizoram, for example, has 3,000 village council members; 30 of them are women. Among all six states, local bodies of Tripura have reservation for women. Assam is the only state with an urban local body, or municipal corporation. In Manipur, no election has taken place for the district council members in the past 20 years.

“Village councils are the most decentralised unit of governance as they include a representative from each clan. But at the same time they are undemocratic in their lack of women’s participation,” said Walter Fernandes, director of North Eastern Social Research Centre in Guwahati. The laws required in the region need to be more related to the democratisation process, he added.

“As of now, the Central government schemes do not directly come to village councils because they are not elected bodies like the panchayat,” said Fernandes. This reduces people’s participation as well as limits their benefit from the local governance. According to Fernandes, laws to make these regions democratic are long due but would be completely useless unless the government follows a long engagement with the tribal and community leaders.