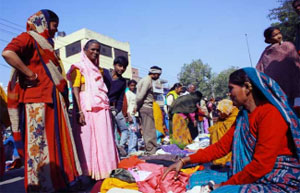 The Rajya Sabha on Wednesday passed The Street Vendors (Protection of Livelihood and Regulation of Street Vending) Bill. Once enacted it will provide relief to hundreds of thousands of street vendors across the country who have been facing regular harassment at the hands of police and municipalities.

The bill ensures protection of livelihood rights and social security of street vendors and provides for regulation of urban street vending in the country. Lok Sabha had passed the bill on September 6, last year.

Terming street vendors as an integral part of urban economy, Girija Vyas, Minister of Housing and Urban Poverty Alleviation, said in Parliament that street vending provides self-employment to the poor and affordable and convenient services to majority of population, especially common people.

Vyas informed Parliament that the ministry has accepted most of the recommendations made by the standing committee.

The bill was finalised after lengthy consultations across the country.

At the time of revising the National Policy on Urban Street Vendors in 2009, the government underscored the need for a legislative framework to enable street vendors to pursue an honest living without harassment. A model bill was prepared in 2009 which was approved by the Union Cabinet and then circulated to the states for suggestions.

After consultations, a new bill was drafted and discussed during a national consultations attended by 22 states in April 2012.

Main features of the bill: