Scientists report on the role played by two processes, rapid evolution and the founder effect, in shaping the existence of lifeforms migrating to islands 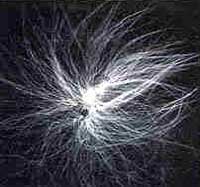 ALTHOUGH forms of life found on oceanic islands have their mainland cousins, they develop distinct identities for themselves. The uniqueness of these living beings is attributed to the changes that they undergo in order to adapt to the island environment.

Scientists believe that such differences could not be chance occurrences but could come about only through natural processes. Martin Cody and Jacob Overton, biologists from the University of California at Los Angeles (UCLA), US, observed these 'processes during their decade-long study, conducted on some 240 islands off the Pacific coast of Canada. Most of the plants belonged to the daisy family (Asteraceae), which are wind-dispersed. According to the UCLA researchers, for a species to establish itself on an island, it should first be able to reach the place (for which it should be mobile). Once this is accomplished5 it has to find means by which it could stay put on the island and remain stationary. Therefore, the early colonisers from the mainland are believed to have not only established themselves on the island, but even adapted themselves to the new environment by shedding their dispersive tendencies and adopting a sedentary life. These adaptations which were subsequently passed on to their progeny, developed well in the stable and insular environment of the islands. Cody and Overton suggest that these two opposing feats could be achieved only through rapid evolution. Moreover, their's is the first study to report on both rapid evolutionary changes and the founder effects of wild plant populations. Founder effect is the phenomenon by which new colonies of a species become instantly distinct from their parent population.

The structure in these plants resp@nsible for their dispersal is called the Oiaspore. The diaspore comprises of two,@parts: the achene, a tiny covered seed'and the pappus, a ball of fluff which surrounds the achene. This parachute- like appearance helps in the dispersal of th'e@4e seeds. The mobility of the seed hinges on the ratio of the volume of the fluff to that of the seed. The experts arrived at the ratio by dropping the diaspore from a height of two m in still air and measuring the time taken by it to reach the ground. They found that the diaspore remained aloft for a longer time when the volume of the pappus was much larger than that of the achene. The ratio calculated by the scientists was obtained by taking a sample of 20 diaspores for each of the 155 plant colonies studied by them. On comparing island and mainland species it was found that the volume ratio of the diaspore was much smaller in the former case, indicating the inability to disperse to far-flung areas.

What led the scientists to think of the possibility of a rapid evolutionary process was the fact that many of these colonies were small, with only a handful of individuals each, and these were also short-lived. This possibility made the scientists undertake a census of the island's plants {daisies happened to be the most abundant species), for the following eight summers. Their study revealed a high population turnover , with older populations becoming extinct and new ones establishing them- selves within a short span of time. These new populations were new colonisers, and did not resemble their predecessors. But the possibility that the latter may have made a reappearance with the help of old, buried seeds is also not being discounted by the scientists. Indeed some species made a re-entry after having been absent for almost nine years. Therefore, Cody and Overton measured the diaspore volume ratio by taking into consideration the age factor too.

The founder effect was established by the fact that the earliest populations of wild lettuce Lactuca muralis- the most abundant Asteraceae species on the islands- had smaller achenes {smaller by about 15 per cent), when compared to its mainland counterparts. On the other hand, it was noticed that subsequent populations on the islands had a smaller volume ratio, resulting in shorter drop time and indicating low dispersal quality of these plants. But most of these weeds are biennials, which makes it apparent that all evolutionary changes in them take place within the first and fifth generations. Therefore by the end of eight or nine years, when the weed got firmly established, there was little or no difference between the mainland and island populations.