Strict US norms for motorcycles

The US Environmental Protection Agency has kickstarted the cleanup drive for highway motorcycles by revising their emission standards after two and a half decades. The new norms, which are more stringent, were notified on December 23 and will come into effect in 2006. When implemented fully, they are estimated to reduce hydrocarbon and oxides of nitrogen emissions by about 54,000 tonnes a year 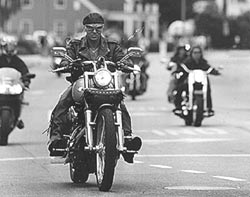 the us Environmental Protection Agency (epa) has kickstarted the cleanup drive for highway motorcycles by revising their emission standards after two and a half decades. The new norms, which are more stringent, were notified on December 23 and will come into effect in 2006. When implemented fully, they are estimated to reduce hydrocarbon (hc) and oxides of nitrogen (nox) emissions by about 54,000 tonnes a year.

"The new rules considerably advance pollution standards for motorcycles. (These vehicles)...will run cleaner than ever before, and America's health and environment will benefit," asserted epa administrator Mike Leavitt. In December 1999, the agency had formulated some of the world's most stringent norms for other passenger vehicles as well.

The current norms will also include previously unregulated motorcycles with engines of less than 50 cubic centimetres (cc), and new evaporative emission standards to control the loss of gasoline through walls of fuel hoses and fuel tanks. Unlike in the past, nox levels too will be regulated. At the same time, manufacturers have been given the flexibility to balance out more polluting motorcycles with cleaner ones so long as the overall fleet's limit is within the emission norms.

This is primarily because the total number of highway motorcycles in the us -- at approximately 4.3 million units -- pales into insignificance when compared with the 8.4 million passenger cars sold in just 2001. However, bikes produce more harmful emissions per kilometre as compared to a passenger car. Hence the need for standards.

In stark contrast, two-wheelers in India constituted 81 per cent of the total vehicles sold in 2002-2003. To be sure, the country's emission norms for this segment were among the strictest till now. But the future standards being set by the us and European countries are likely to be more severe.

For the period beginning 2005 and up to 2008, two-wheelers in India -- irrespective of vehicle size -- have to meet the hc+nox limit of 1.5 grammes per kilometre (g/km). epa has stipulated a level of 1.4 g/km from 2006. This will be optional for bikes up to 279 cc because very few motorcycles fall in this category. The same limit will, however, be mandatory for bikes in the 280 cc and above segment. The us also has separate norms for hc as opposed to India. Further, in the us standards' next phase, the hc+nox level for 280 cc or bigger motorcycles will be 0.8 g/km. The eu, too, has fixed a 0.8 g/km limit for hc and a 0.15 g/km level for nox for 150 cc and above vehicles from 2006.

These figures illustrate the resolve of governments across the world to promote environment-friendly technological development even in a sector which is a non-issue for them.

For its part, India is yet to notify norms beyond 2008 though they have been proposed in the country's Auto Fuel Policy. All that the Union government is willing to state is that "progress in terms of meeting the proposed emissions standards for 2008 will be reviewed in 2005". Clearly, some revving up is in order.