A semiconductor laser would enhance the performance of telecommunications 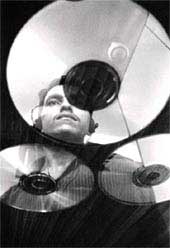 blue light semiconductor diodes is being developed in Japan that are expected to revolutionise the information technology. The device emits blue laser light continuously at room temperature. Shuji Nakamura at Nichia Chemical Industries in Tokushima, is making an effort to produce diodes that may work as a substitute for the infrared lasers used in compact disk players. With the help of these diodes, data storage capacity of a Compact Disk (cd) could be increased fourfold (Scientific American , Vol 277, No 3).

Blue lasers have a short wavelength that can be effectively used in laser printers, high resolution displays and in underwater communication systems. Nakamura says he is confident to achieve success in developing a device with a lifetime of 10,000 hours by the end of 1998. The semiconductor diodes are based on a compound called gallium nitride. For developing the device, Nakamura is using a basic modification of a standard technology known as metal-organic chemical vapour deposition (mocvd).

In conventional mocvd , semiconductors are created when reactant gases flow over a substrate, parallel to its surface. But in the mocvd system developed by Nakamura, gases flow in two directions instead of one. This configuration surpasses a large thermal convection on the substrate and cools the temperature of reactant gases on the substrate just before reaction. He says that the cooler temperature gives rise to more stable reactions and much higher-quality films. Nakamura aims at using the system for mass production of blue light lasers.