Struck at the root

Livelihood of 2,000 families is threatened as the Maharashtra forest department tries to ban extraction of lotus roots 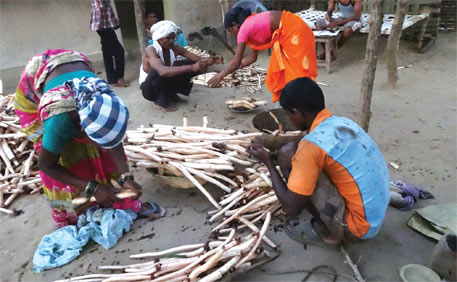 Elderly Kamunabai Markam is bent over a puddle of water in the hot afternoon sun washing lotus roots she has collected after a day of backbreaking work. “Where are you going to take me?” she asks as a Down To Earth photographer clicks her picture. “To jail? I am all right with it if you give me my meals, so don’t try to scare me.” About a dozen men and women working nearby murmur their support.

Their reaction is the result of the Maharashtra forest department’s efforts to stop extraction of lotus roots (locally known as bhishikanda) at the Navegaon Bandh reservoir in Gondia district. The move has jeopardised the livelihood of some 2,000 families, most of whom belong to the poverty-stricken Dheevar fishing community. Lotus roots are an important dietary supplement for the community and provide them food security (see ‘Roots crucial to local diet’ on p47).

While the department says its actions are part of conservation efforts, the community alleges the department has been acting under pressure from powerful Malgujar landlords. These landlords claim to be conservationists, but want to employ the poor as labourers in their summer paddy fields, say people in the area.

The forest department’s efforts to stop bhishikanda extraction is based on a government resolution issued in 1985. The resolution calls for a ban on the auction of khus grass (vetiver) and lotus roots by the irrigation department to prevent damage to the environment. But the resolution only bans auction, and does not refer to extraction by the people.

Khus extraction was stopped decades ago as it caused a fall in production of the grass, say villagers. But extraction of lotus roots has been going on for 40 years and there has been no drop in production. “Lotus roots regenerate very fast once rain falls,” says Patiram Tumsare, fisherman from Jambhli village. “Unextracted stem which grow underground (rhizome) rots with the rain, and gets wasted.” In fact extraction loosens the soil, facilitating better regeneration, he says, adding, “Last year there was hardly any extraction, so the soil this year is harder, and regeneration is slow.”

No evidence of damage
“Initially, conservation groups argued that root extraction was harming the food base of water birds,” says Manish Rajankar of Bhandara Nisarga Va Sanskruti Abhyas Mandal, a Gondia-based non-profit working among the fisher community. “When it was pointed out that the roots are three feet underground, they argued that the plants were bird habitat.” But root extraction takes place only during summers, while “aquatic birds, both native and migratory, breed during the monsoons, when there is nothing to extract,” says Rajankar.

According to Rajankar, the department data shows no drop in the numbers of aquatic birds. “Actually, in the last two years, the number of migratory birds has gone up,” he says. “If an antiquated government resolution is to be resurrected now, there has to be a good reason, and the department does not appear to have one.”

Pramod Panchabhai, assistant conservator of forests of Navegaon Bandh, admits there is no scientific evidence of lotus root extraction harming any bird species. The department’s action is based purely on the abstract premise that human interference harms natural ecologies.

The entire exercise, says Panchabhai, is being undertaken at the behest of people he calls “local naturalists” who have been egging the department on to “protect”the reservoir.

“The department is simply taking advantage of people’s fear of persecution,” says Rajankar. “The reservoir is adjacent to the Navegaon Bandh National Park where people have been jailed for something as trivial as collecting a few mushrooms or bamboo shoots for food.” Villages such as Jambhli and Rampuri, where lotus roots are extracted, have lost their forests to the park, and their community forest rights have been ignored, he adds.

People say that the move to ban extraction came just one year after the villages around the reservoir formed self-help groups (SHGS) to market lotus roots to places like Rajnandgaon and Raipur in Chhattisgarh. Creation of SHGS removed middlemen from the business, enabling people to earn a good wage. “In 2012, SHGS paid Rs.15 per kg for lotus roots instead of the Rs.7-8 local traders were giving,” says Maniram Markam of Enodi village. “Around that time the landlords of our village, who have started a non-profit for nature conservation, started opposing root extraction,” he adds.

“Root extraction earns us Rs.300-600 a day during the summer season, whereas the landlords pay only Rs.70-100,” says Kamunabai. “Even through MGNREGA we get only Rs.165. We need this work because it offers the best wages during summers.” Village residents say 80-85 per cent of the people have stopped extraction work because of pressure from the department. Maniram, earlier part of one of the SHGS, has now started carting small amounts of produce to smaller village markets near the Chhattisgarh border. “Our shg used to sell truckloads of roots every day,” he laments. “Now we hardly sell 300-400 kg.”

Rights denied
Article 41 of the Biological Diversity Act, 2002, gives people the right to manage, regulate, charge royalty on and make sustainable use of bio-resources, based on equitable benefit sharing. However, gram sabhas are under pressure from powerful landlords who do not allow them to form biodiversity management committees (BMC), say people. As of now, only Rampuri village has formed a BMC. The reservoir comes under the jurisdiction of Navegaon Bandh panchayat which is dominated by landlords. “They are not allowing us to form BMCs and claim our rights as a community because they want to maintain their dominance,” says Tumsare.