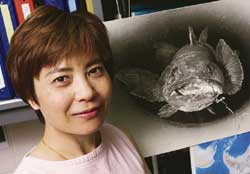 researchers in Germany have obtained a structural image of a protein -- called Lip b -- that the pathogen Mycobacterium tuberculosis needs for survival in human cells. This image reveals features of the molecule that could be targeted by new antibiotic drugs to treat tuberculosis.

The findings by scientists from the Hamburg outstation of the European Molecular Biology Laboratory (embl) and the Max Planck Institute for Infection Biology (mpiib) in Berlin appeared in the journal Proceedings of the National Academy of Sciences (Vol 103, No 23, June 6, 2006).

M tuberculosis is dangerous because it hides and persists in the immune cells of our bodies. "It can only persist there because of the activity of key molecules," says Matthias Wilmanns of embl Hamburg. Lip b is essential for the organism because it activates cellular machines that drive the bacterium's metabolism. In acutely infected cells, particularly in patients infected by drug-resistant forms of M tuberculosis, the scientists found a 70-fold increase in the production of Lip b when compared to other cells. "This strongly indicates an involvement in pathogenesis and makes it a particularly interesting target where traditional drugs have lost their efficacy," says mpiib director Stefan Kaufmann.