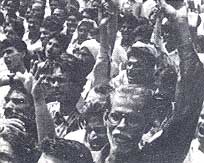 PEOPLE in rural areas are surely waking up to fight for their rights. A hundred odd families belonging to two tiny villages of Mitihini and Khairi in Sonebha,dra district of Uttar Pradesh, have drawn the battle lines against the National Thermal Power Corporation (NTPc). They have stopped its attempts to build an ash dyke plant on their lands, situated on the banks of Rihand Dam reservoir in the district.

The villagers are demanding either a plot of agricultural land in lieu of the land acquired by the NTWs Rihand Super Thermal Power Project, or employment on a permanent basis in the company. NTPC on the other hand claim that both the options are out of their means.

But the NTPc had included a1and-for-land' option in its Rehabilitation Action Plan-while applying for a World Bank loan of us $1.2 billion. The company is offering compensation and alternate plots for building houses, However, the villagers would lose their only means. of subsistence and ultimately starve if they we not given agricultural lands.