Post-harvest clumps in rice fields burn and increasepollution in Punjab 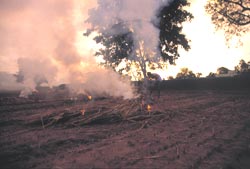 suspended particulate matter (spm) levels suddenly spiral in rural Punjab in the month of October. The culprit: fires lit by burning huge piles of stubble from rice plants in almost every field. According to the Punjab Pollution Control Board (ppcb), the permissible limit for spm for residential areas is 200 microgrammes per cubic metre cube (g/m3). But during October, it increases in Punjab from a minimum of 218 g/m3 to a maximum of 690 g/m3. The alarming results were based on pollution monitoring in the residential areas of Humayunpura village near Ludhiana.

"Stubble burning has become a common practice among farmers for a few years now. It usually takes place in the beginning of October, when the rice crop is harvested," reveals D K Dua, member secretary, ppcb. In a hurry to prepare the field for another crop (mostly wheat), farmers in the region get rid of stubble from the rice plant by burning it.

To increase farmers' awareness, ppcb has embarked on an ad campaign in local tv channels. The ads exhort farmers not to burn the stubble and to sell it to a plant that can generate energy from it. The Punjab State Electricity Board (pseb) has set up a 10-megawatt power plant for the purpose. It is located at Jalkhedi in Fatehgarh sahib district (about 17 kilometres from Patiala). Farmers are paid between Rs 40-45 for every tonne of the rice stumps.

pseb officials complain that farmers do not heed their advice, and that this has led to an increase in pollution. Farmers, on their part, cite a practical problem. "They (plant officials) do not come to collect rice stubble," says Trilochan Singh, a farmer from Patiala. He feels that farmers are forced to burn it since they cannot go to the plant to deposit it.

On their part, pseb officials say that they do not run the plant now. "We have given the plant on lease to a private company which is responsible for its functioning," says H S Sahay, member (generation), pseb.