Scientists cannot explain why both the quality and quantity of sperm have been dropping since the 1940s. Indications are pollutants may be responsible. 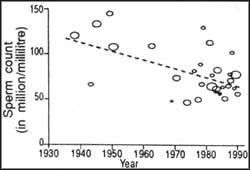 A WORLDWIDE study of fertility research says men today have just about half the sperm count of men 50 years ago and there has also been an appreciable drop in the average volume of seminal fluid. These findings raise worries that male reproductive organs may be getting adversely affected by pollutants such as PCBs and DDT.

The study by Niels E Skakkebaek and his colleagues at the University Department of Growth and Reproduction in Copenhagen found the average sperm count dropped to 66 million spermatozoa per millilitre in 1990 from 113 million in 1940 (British Medical Journal, Vol 305 No 6854). Their analysis also showed 18 per cent of men in the 1980s had counts below 20 million spermatozoa, the lower limit of the normal count, compared with 6 per cent between 1930 and 1950. The number of men with high counts -- more than 100 million -- also dropped dramatically from 50 per cent to 16 per cent over the same period.
Using a controversial research method called meta-analysis, essentially a study of other studies, the researchers collated sperm-count reports of nearly 15,000 men compiled around the world since 1940. The researchers adjusted the data in several ways to overcome discrepancies that could have arisen because of different methods used to collect data, but found every time that there was a declining trend in sperm counts in USA, Western Europe and many Third World countries.

The researchers noted that the sperm count decreases coincide with an increase in the incidence of genito-urinary abnormalities, such as testicular cancer, which some studies have correlated with severely depressed semen quality.

The researchers pointed out that various factors, including nutrition, stress and socioeconomic status, can affect fertility. The Skakkebaek study leaves unresolved the cause of the sperm count decline. Pollutants such as DDT and PCBs, when ingested by pregnant women, are known to imitate some functions of the estrogen hormone. A determinant of a man's sperm production is the estrogen level to which he is exposed while still a foetus. High estrogen levels are believed to adversely affect the growth of special cells in the foetal testes that control sperm production.