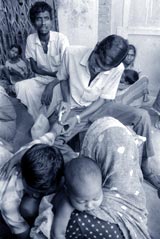 A recent study commissioned by the Confederation of Indian Industry (cii) has recommended a greater private role in India's healthcare sector. Its salience is that better services can be provided only if private players invest in the segment. There is, however, a catch: the document centres around the lucrative tertiary care market only, even though primary healthcare needs of the majority of the country's population are not being met. The tertiary segment deals with lifestyle-related diseases such as diabetes, asthma and cardiac problems, which involve hospital care and specialised skills. It is, therefore, considered a sound business proposition. On the other hand, primary care (pertaining to infectious diseases such as malaria, tuberculosis and aids) is a capital-intensive exercise where the returns are not commensurate with investment.Clearly, the 'health is wealth' adage has been taken too seriously while preparing the report.

The recommendations are based on an analysis done by multinational consultancy firm McKinsey & Company. The private sector, comprising hospitals and the pharmaceutical and insurance industries, has got the study conducted to evaluate the existing health framework. "The way forward is to move from a hospital-centric and doctor-driven healthcare model to a customer-centric and business-driven one," feels Habil F Khorakiwala, chairperson of Wockhardt Group, a healthcare provider. It is evident that the entire focus of the industry is on curative care as this is economically beneficial for producers of pharmaceuticals and medical equipment. In the process, preventive care has been neglected.

In fact, McKinsey's Ajay Dhankhar concedes that rural areas were not a part of the sample that was studied over nine months. "These recommendations are based on successful models like Thailand's," he points out, justifying the exercise.
The results of the report are based on a mathematical model, which used primary data collected by organisations like the World Health Organization. The study reveals that a fund crunch has resulted in inadequate infrastructure and insufficient manpower.

findings: In the case of tertiary care, only around seven to 14 beds are available per 0.1 million people. And there are merely 12-18 specialist doctors for 0.1 million people. The report also highlights that one-third of the doctors are not trained in accordance with allopathic norms. The report observes that there is an utter lack of regulation, since more than 75 per cent of healthcare is being provided by the unorganised private sector.

inferences: These acute shortages have led to high infant mortality and daly (disability adjusted life year). The former is as high as 70 per 1000 births in India as compared to an average of 56 in developing countries. daly, which is the burden from premature mortality and disability, represents the economic loss incurred due to a disease. At 274, it is well above the average of 256 for deve-loping countries.

wish list: The industry buttresses its case for a greater private role in the health sector by stating that such a move would guarantee world-class treatment.

To implement this system in the country, the industry has asked for some incentives from the government. These include opening up foreign direct investment to enable greater inflow of funds. "Demonstrating to the world that healthcare in the country is profitable would give a further boost to private players," avers C D Reddy, chairperson, cdr hospitals, Hyderabad.

Since 30 per cent of the investment made in establishing new units is spent on acquiring land, the industry wants this immovable asset at subsidised rates. It has also sought a five-year tax holiday to utilise profits for development. In addition to this, the report suggests customs duty waiver on imported consumables to make high-quality tertiary and secondary care more affordable.
The report's recommendations revolve around the premise that the next 10 years will witness an increase in lifestyle-related diseases such as asthma, cancer, and cardiovascular and central nervous system ailments (see box: The business end of healthcare). While the incidence of these diseases has spiralled, the industry almost trivialises other health problems. "Infectious diseases are not going to be a major part of the health burden.After all, how many people have died of malaria last year?" asks Naresh Trehan, executive director of Escorts Heart Institute and Research Centre, New Delhi. He appears to have taken the available data on face value. But the fact is that malaria deaths are rarely recorded in the country. "In rural areas, people still die of infectious diseases such as malaria and tuberculosis," asserts former Union health minister C P Thakur.

"Infectious diseases are linked to poverty and are on the rise in each and every developing country, including India," points out Mira Shiva, director, (women, health and development and rational drug policy) in New Delhi-based non-governmental organisation Voluntary Health Association of India. "Common people would be more worried about diseases like persistent cough. How is privatisation going to help them?" asks Satish Kumar of Elder Pharmaceuticals Limited, New Delhi.

Shiva draws attention to another negative aspect: "With profitability being the overriding objective, healthcare is not compassionate in the corporate setting. At times, the management does not even allow doctors to fulfil their oath."

The report puts forth the view that privatisation will decrease treatment costs by curbing office supply and travel expenses. But another method employed by the industry to cut costs is by scrimping on diagnostic tests. This can sometimes be fatal for the patient. Also, according to Amit Sengupta of Delhi Science Forum: "Data shows that the cost of healthcare has actually increased after privatisation in the us." And the us itself is contemplating nationalisation of healthcare.

The industry has come up with options such as insurance and user fee to ensure that the poor can access healthcare. This despite similar programmes having failed miserably earlier. cii feels that insurance would take care of that huge chunk of the population which is unable to bear treatment costs. "The rich would subsidise the poor and the healthy would subsidise the sick," opines Dhankhar.

The report suggests that like the us, India too can adopt a model wherein poor people are given insurance benefits under the government's social security system. But the industry seems to forget that the percentage of poor among the Americans is small and the us government can, therefore, shoulder their responsibility without denting the treasury. But the Indian government would have to take care of the majority of the population. Meanwhile, the industry has formed the Indian Healthcare Federation along the lines of the American Hospital Association.


While the industry thinks that the only way to provide satisfactory healthcare to the country's denizens is to do away with the existing infrastructure and start afresh, experts feel otherwise. "The correct approach would be complementing the existing system instead of substituting it with a new model," says Thakur.

"The government should find ways to increase the money spent on the sector and nationalise the health sector in its entirety," opines P K Dave, director, All India Institute of Medical Sciences, New Delhi. Thakur concurs and adds: "It is imperative the government continues to provide healthcare - at least for the next 25 years."

On his part, Union minister of health and family welfare Shatrughan Sinha has so far refused to toe the private players' line. "I will back the industry only if it supports society, the community and the nation," he has stated. For now, the government is according priority to primary care though insurance might be one of the areas under consideration.