New LCD screens are all set to revolutionise the visual world 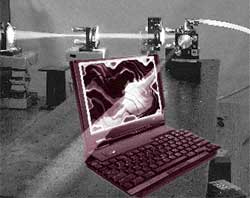 But now, scientists feel that lcd screens, more sophisticated than ever before, can be developed using newer materials like that recently developed by Hiroshi Kawazoe and his collaborators at the Materials and Structures Laboratory of Tokyo Institute of Technology, Japan.

The material, a compound of copper, aluminium and oxygen, has some remarkable properties which can be exploited for making advanced displays. Conventional materials, like silicon, essentially used in electrical circuits, are opaque due to their atomic structure. Electricity is carried by free electrons (charge carriers).When we shine light on an object, the energy of the photon (bundles of energy in a light beam) is absorbed by some electrons causing them to jump from the valance band to a higher band called the conduction band. This can only happen if the photon has enough energy to push the valance band electron up into the higher band, overcoming the band gap or the energy difference between the two bands.

If the material can be made in a way that the band-gap between the valence and the conduction and is more than 3.1 electron volts, then the material will not absorb visible light and will be transpa-rent. This is exactly what the Japanese team has done. Based on extensive modelling, they produced a material which is an oxide of copper and aluminium. The band-gap in such an oxide is about 3.5 electron volts, which makes it transparent to visible light. But this is not the end of the story: the metallic oxide by itself is an insulator. For the material to be useful in devices, it has to be a conductor. This was achieved by using the material as a host and then growing thin films of it in an oxygen-rich environment. This conver-ted the insulator into a conducting film. The problem with adding impurities is that in sufficient quantity, they themselves could absorb the light and make the material opaque. In the copper aluminium oxide film that Kawazoe and his group produced, this did not happen. Transparent conducting films have been around for some time now as flat, digital display units. But almost all transparent materials used till now have been a particular type of conductor, namely n-type. This basically means that the current is carried mainly by negatively charged carriers (electrons). In contrast, the copper oxide conducting film is a p-type: the current is carried by posi-tively charged holes, which are basically empty states left in the valence band when the electrons are bound (in this case by the oxygen impurity). Moreover, this p-type conductivity is achieved at room temperature which makes it ideal for use in electronic devices.

The copper aluminium oxide used by the researchers has been known to scientists for many years but this is the fist time that a conducting film has been made of it. Though the theoretical reasons for its p-type conductivity are still not very clear, it is evident that it could lead to many new applications. For instance, by using a n-type and p-type material in conjunction, a transparent diode could be made which could lead to a variety of uses like switches and even computer memories (Nature , Vol 389, No 6694).