Mayhem is discovered at the core of matter 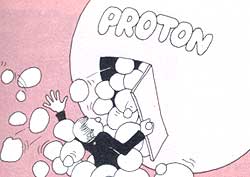 A HEAVENLY calm, if yogis are to be believed, may pervade the inner sanctum of the human mind, but the core of matter is turning out to be a hotbed of activity. Particle physicists probing the structure of protons and neutrons -- which constitute the bulk of matter -- using a gigantic "microscope" have found the inner lives of the 2 particles abuzz with excitement (Science, Vol 264, No 5167).

The "spying eye" is a particle accelerator called Hadron-Electron Ring Accelerator (HERA), located at the German particle physics laboratory near Hamburg. By accelerating both protons and electrons and colliding them head on, the 6.8 km-long ringed collider achieves about 100 times the collision energy of previous experiments, allowing the recording of particles upto 100 times smaller than those that could be observed previously. HERA enjoys another advantage over its more powerful cousins: it is the first facility that can speed up particles of wildly different masses.

Before HERA, physicists knew that a proton consisted of 3 smaller particles called quarks floating in a lot of empty space. But what really went on in this desolation was a mystery.

Now, after 2 years of operation, the collider has revealed the nature of activity inside both protons and neutrons -- for the former, experimentally, for the latter, by inference. Allen Caldwell of the US-based Columbia University and other members of an international team of investigators have found that in a proton, the 3 familiar quarks are adrift in a surprisingly dense sea of "virtual" quarks that wink in and out of existence. They have even "heard" mysterious collisions in which electrons ricochet off an unidentified object within a proton's inner space.

Like earlier researchers, Caldwell and his colleagues probe the structure of the proton by reading the post-collision trajectories of the electrons, apart from analysing the debris from smashed protons.

According to the quantum chromodynamics theory that describes the physics of the nuclear domain, the extra members making up a proton could be virtual particles that take the form of quarks and a haze of particles called gluons, which bind the quarks together. But the mathematics for predicting the number of such particles in a proton or neutron is too complicated. Therefore, physicists were largely unprepared for the bustling crowd of virtual quarks and gluons HERA has revealed.

HERA has shown that a proton contains about 30 gluons and 3-4 virtual quarks at any given time. Theory couldn't have predicted these numbers; hence, physicists believe, they will have a profound effect in the long run on our understanding of protons and neutrons.