The floods in Bangladesh show no sign of abating 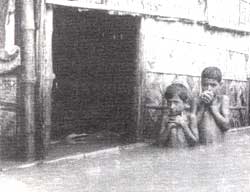 Two-thirds of Bangladesh is under floods, which show no sign of receding. It is feared that there will be a delay in planting of the next crop, which may further worsen the situation. The floods, which have affected 51 out of 64 districts, may lead to a shortfall of four million tonnes of rice crop during the winter. Already, many other crops have been wiped out. The fish ponds which not only provide income but also nutrition to many farmers, have also been wiped out by the flood waters.

The extent of crisis can be gauged by the fact that paddy fields are under 10-feet deep water. Animals which act as a support to a farmer in times of crisis have also become a burden. The grasslands are all submerged and the fodder price has more than doubled. The extent of submergence is so widespread that relief camps have become inaccessible to people. Out of desperation these affected people are borrowing money from the moneylenders who are known for exploiting the poor by charging exorbitant rate of interests.