Subsoil carcinogens possible cause of cancer in Punjab 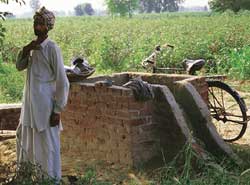 The bedrock of southern Punjab has high concentration of the carcinogenic elements uranium and thorium. A recent study blames the high rates of cancer in this region on this phenomenon. A report to this effect was submitted to the Punjab State Council for Science and Technology (pscst) in Chandigarh recently. However, pesticides and arsenic had earlier been identified as the causes for the cancer.

The study was carried out by a team from the Centre of Advanced Study in Geology of Punjab University. The group carried out the study in Giana and Jajjal villages of Bhatinda district, the two villages that had reported one of the highest incidence of cancer.

Geological studies of southern Punjab show that the Aravalli-Delhi ridge reaches Tusham in Bhiwadi district of Haryana. Here it turns northwest, touching only the southern part of Punjab near Bhatinda. The ridge is subsurface here, which contaminates the groundwater. These rocks are formed by volcanic activity, and the major types present are quartzite and granite. Unlike other granites, the rocks here have high concentration of uranium and thorium.

Naresh Kochhar has extensively researched the area's geology. He headed the research team. He believes the contaminated rocks turn the groundwater carcinogenic. His team visited two adjoining districts in the Malwa region -- Bhatinda in Punjab and Sirsa in Haryana. They found the rate of cancer in Bhatinda higher than that in Sirsa. They realised people in Bhatinda drink groundwater, while those in Sirsa use canal water. To verify their hypothesis, they collected water samples from Giana and Jajjal. The amount of uranium in the 18 samples collected was 2.5 times to 158 times higher that 2 parts per billion (ppb), the World Health Organization's maximum permissible limit. Some samples exceeded the Bureau of Indian Standards limits for lead, calcium, sulphate, iron and magnesium.

"People have been linking groundwater quality to the high incidence of cancer. Now medical geology explains why," says Kochhar. The team suggests instead of sourcing water from below the ground, it should be drawn from surface water sources.

The pscst had received two more reports on the subject last year: from Punjab Agriculture University (pau) and the Punjab Pollution Control Board (ppcb).

In May 2005, pau sent the council a report linking the high incidence of cancer to arsenic in the water. Their preliminary investigation showed water from handpumps in Bhatinda had arsenic levels as high as 225 ppb and 283 ppb in deep tubewells. But the canal water in the area had the lowest arsenic content -- between 6 ppb and 8 ppb. The permissible limit of arsenic in drinking water is 10 ppb. Thus, pau experts feel arsenic could be the real cause of cancer in Punjab.

ppcb's report had identified pesticides as a major cause of the disease in southern Punjab. The Centre for Science and Environment, New Delhi, conducted a study in the area in 2005. This showed pesticide levels in human blood were high not only in the southern district of Bhatinda, cotton farmers extensively use pesticides, but also in Ropar district in eastern Punjab, where pesticide use was not so high (see 'Bhola Singh is dead', Down To Earth , June 15, 2005).

The way out of conflicting theories that cause confusion is simple: find a safe source of drinking water for people living in southern Punjab. Though Kochhar's team had suggested sourcing canal water to drink, N S Tiwana, executive director, pscst, has other ideas. As water is abundant in the area, he feels reverse osmosis could be used to clean groundwater. This process has proved quite successful in Jodki village of Firozpur district, where people are getting drinking water at as low as 4 paise per litre.

"There is a need to assess whether the levels of radioactivity are high enough to cause cancer," says J S Thakur of the Post Graduate Institute of Medical Research, Chandigarh. He was part of the team that carried out the ppcb study.

Tiwana says, "It is not right to say that only one factor is responsible for the higher incidence of cancer in the area. We would like to carry out a study which takes into considerations all these factors." So far nothing has been done to formulate such a study.