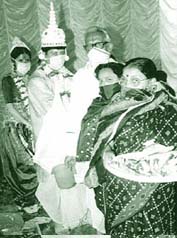 a mystery disease afflicted Siliguri in West Bengal in February, 2001 and claimed 39 lives. The disease, with symptoms such as high fever, respiratory problems and paralysis, caught the city's medical and civic system unaware. As the panic spread, shops and schools were closed. "The situation got worse when doctors and nurses from some private hospitals started fleeing the town. The administration took almost one week to react to the outbreak," says Amitaksha Nag, a resident of Hakimpara in Siliguri.

When the disease first broke in early February, local doctors diagnosed it to be encephalitis. An expert team led by the reputed School of Tropical Medicine (stm) virologist D Neogi ruled out the possibility of encephalitis. State health minister, Parthe De, quickly got into the guessing game and said it was due to cerebral malaria. Some experts of Indian Medical Association even hinted at the possibility of bubonic plague, which was further fuelled by the despatch of 150,000 tetracycline tablets.

Experts from National Institute of Communicable Disease (nicd), Delhi, National Institute of Virology, Pune, and World Health Organisation (who), who visited the areas, identified the disease in their preliminary report as a killer pathogen 'mutating measles virus' that had caused similar havoc in Maharashtra a few years ago. The mutating measles virus attacks the respiratory and renal system.

However, the controversy regarding the source refuses to die down as Neogi has differed on this conclusion. Speaking to Down To Earth , he said: "I am not convinced yet. This theory cannot explain why only adults were affected and why there was no symptom of rash or any other kind of skin infections, which is expected in the case of a mutating measles. The samples should be sent to Centre for Disease Control (cdc), Atlanta, to find out the real reason."

Several microbiologists also sounded sceptical about the 'mutating measles virus' as they feel that "it is very unusual that a mutant virus variety establishes itself so quickly in a population." The state's health secretary has admitted that the report sent by Lalit Kant of the Indian Council of Medical Research (icmr), New Delhi, has not been confirmed.

Siliguri is home to 151 slums and the authorities are busy spraying ddt and cleaning the city and the two rivers, Jorapani and Fuleswari, into which most of the city's waste are dumped. Medical specialists say that these have become breeding grounds for vectors and pathogens. K J Nath, former director of All India Institute of Public Hygiene and Health believes that without a proper environ-epidemic disaster management and early warning system, such incidents cannot be avoided.