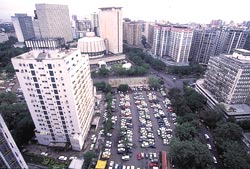 the rising incidence of malaria in Mumbai does not seem to be reason enough for the authorities to declare it a notifiable disease. Even as the death toll due to the disease was being chalked up, particularly in upmarket areas of the city, Subhash Salunke, director of health services, Maharashtra, outrightly refused to declare malaria as a notifiable disease. According to Salunke, the number of malaria cases in the city were so mind boggling that any attempt to notify it would result in endless paperwork. "The civic authorities would expend all their time in just registering every case without really achieving anything from it," Salunke, reportedly said.

Notifiable diseases are usually life threatening and have to be reported to the authorities on diagnosis. Mumbai has of late been witness to frequent malaria outbreaks caused by the drug resistant pathogen Plasmodium falciparum. This makes the situation worse in the city. The deadly falciparum has already claimed 10 lives in Mumbai. By October 10, 2002, 1348 cases of falciparum malaria had been detected.

However, the authorities are unmoved. They are even reluctant to reveal the actual figures. Ramesh Kathuria, executive health officer, Brihanmumbai Municipal Corporation told Down To Earth that only two malaria deaths had taken place so far. As the disease is not yet a notifiable one, several cases go virtually unreported. Moreover, it is difficult to identify falciparum malaria as the symptoms can be confused with other diseases.

But the most disturbing trend wittnessed in the city is the upsurge of the disease in even the well-heeled areas of Mumbai, such as Colaba. Pathologist Govind Chainani, who practices in Colaba, believes this is due to the focus of fogging operations in slums. "An increasing number of slums have grown rapidly close to high-rise and bungalows. Mosquitoes have found new victims there," he says.