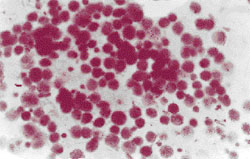 a recent West Bengal pollution control board (wpcb) report states that respirable suspended particulate matter (rspm) is the biggest concern for the city. "Though rspm has come down from 176 microgrammes per cubic metre (g/cum) in 1997 to 99 g/cum in October 2000, it is still almost double the permissible standards," the report says. During the months of December and January, the rspm concentration is around 250 g/cum. As a result, at least 80 per cent of the city population is suffering from respiratory disorders during winter.

The city's cancer registry maintained by Chittaranjan National Cancer Institute (cnci) links increasing cases of lung cancer to poor air quality. The cnci data shows that Kolkata has the highest percentage of male lung cancers in the country -- 18 per cent in 1999. The average male cancer occurrence during 1997-99 was as high as 15.7 per cent. It is increasing among females as well -- from an average of 3.6 per cent during 1997-99 it increased to about five per cent in 1999.

Said to be first of its kind in India, the four-year study -- sponsored by the state environment department and undertaken by cnci's neurobiology department and Calcutta University's zoology department -- has clearly established the vulnerability of the people to air pollution. Trisha Lahiri, the project leader, told Down to Earth: "We have selected alveolar macrophage in sputum as the biomarker to assess the vulnerability to air pollution." Alveolar macrophage is a group of phagocytic cells -- member of body's immune system -- which attempt to fight against inhaled particulates. Based on the premise that these cells rise in number within lungs in response to the increasing air pollution, the number of alveolar macrophage in deep sputum is a clear indicator of the exposure level to the respirable particulates.

The study, carried out over a randomly selected sample of 1,500 people at 23 field stations within the city municipal corporation area, observed: "The number of alveolar macrophage in the sputum of an average city dweller is 10 times higher compared to their counterparts in Sunderbans, Midnapore or Burdwan, where air pollution is minimal." Even within the city the number is significantly higher among taxidrivers and traffic police, who are more exposed to air pollution.

Out of 900,000 vehicles plying on the city roads, less than one-fourth have pollution under control certificates. The city's police commissioner, Dinesh Bajpayi, said that the number of vehicles fined for pollution rose from 35,648 in 1998 to 47,189 in 2000. The state environment minister, Manab Mukherjee, has proposed to phase out old commercial vehicles, but has not fixed any deadline.