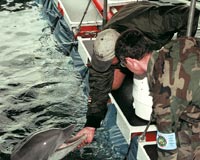 Animal rights activists were shocked and dismayed as the Indian Navy announced its plans to use dolphins for planting advanced limpet mines on enemy ships and submarines, following successful trials. O P Yadav, general manager at the Ammunition Factory at Kirkee, Maharashtra, which manufactures these mines, said dolphins were chosen because of their high intelligence level and because they would cause little suspicion.

So far, navy divers have been planting mines on enemy vessels but the job is fraught with danger. Animal rights activists call the decision to use dolphins inhuman, and say that humans have no right to make other animals fight its own wars.