Suit yourself for safety 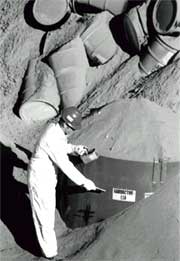 working in hazardous environments such as nuclear reactor sites or chemical factories could be made a lot safer, now that us scientists have developed a new protective suit that has an electrically-conductive polymer incorporated into it. If the suit is torn in an accident, the polymer closes a circuit, immediately activating an alarm.

The new system, which has been patented by a team from the well-known Los Alamos National Laboratory in New Mexico, usa , has been built into material essentially used for protective clothing designed to shield against radiation, toxic chemicals or bio-hazards.

Knowing early that they have been exposed to a hazard will be of great help for the workers.

At present, tears that leave the wearer exposed to the hazard may not be discovered for some time after they have occurred.

Some existing puncture detection systems either do not work in time, which means that they are only checked before the worker puts on his or her protective clothing. Other only work when pierced by electrically-conductive materials, such as metal tools. The Los Alamos system, however, works when nonconductors such as wood puncture the clothing. This gives it broader use, according to Robb Hermes, one of the developers of the new protective suits at the Los Alamos laboratories.

When there is a rip or a puncture, the semi-solid conducting polymer layers are forced through the insulating layer between them, closing a circuit. This could be used to trigger a light-emitting diode (led) or an audio alarm in the wearer's face mask.

Earlier fabric warning systems used layers of thin metal foil separated by a nonconductor. These systems only worked when they were pierced by a conductor. The semi-solid polymer ensures that any tear will be registered.

"I wanted to make it as simple as possible so that most businesses could adopt it," says Hermes. Details of the wearer's actual warning mechanism -- sound or by led -- have yet to be decided.

The polymer was originally developed for special gloves built into the enclosed glove boxes used by workers at Los Alamos to manipulate certain radioactive materials.

The gloves are replaced at regular intervals, but are not routinely tested, according to Los Alamos spokesperson James Danneskoid.

So if a glove is damaged, radioactive contamination is detected only after the exposure has already occurred, sometimes many hours later. With the new system, the warning is immediate.

This, say the developers at Los Alamos, should ensure that the workers using these gloves stop using them the moment the damage occurs.