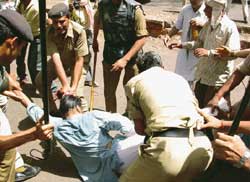 Nepal's poorest people are being forced to suffer the consequences of an alleged attack by Maoist rebels on an aid worker recently. Debkala Acharya, a female worker involved in the Rural Community Infrastructure Works (rciw) in Kalikot district, is recovering from her injuries. The assault led to the German Development Agency, the uk's Department for International Development, the Dutch Cooperation Agency and the un World Food Programme, which fund rciw along with the government, putting the project on hold. rciw operates in Nepal's poorest districts by providing livelihood to people through its food-for-road construction scheme.

Government agencies express regret at the foreign donors' move. Basanta Raj Gautam, national programme coordinator (rciw) of the ministry for local development , says: "The government was not included in the decision and we are not in consensus with it." Many non-governmental organisations also deem it unfair. But gtz country director Ulf Wernicke says: "We expect a commitment from the Communist Party of Nepal-Maoists and the suspension will prevail until we have assurances of full security for our staff."