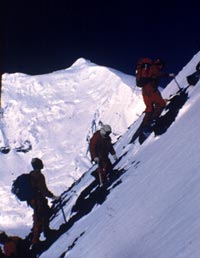 much to the pleasure of conservationists and mountain lovers, the Uttaranchal government recently formulated a new policy to regulate mountaineering activities and make them more eco-friendly. The new rule will come into force from next year.

"The aim of the new law is to stop haphazard mountaineering. We will also provide better facilities, including guides, porters and rescue services to the climbers," says state forest secretary B P Pandey. Under the new guidelines, only two expeditions will be allowed per peak in a month. Since the mountaineering season in the state lasts for six months, this would work out to only 12 expeditions per peak in a season. The maximum number of climbers for an expedition has been fixed at 10, including one doctor. Each expedition will also have to deposit Rs 10,000 as security against littering the mountain.

"Around 60 per cent of the country's mountaineering expeditions are undertaken in Uttaranchal," says veteran mountaineer Darshan Khullar. Bachendri Pal, the first Indian woman to scale Mt Everest, suggests: "Such a policy can become a benchmark for other states. Local villagers should be involved in maintaining the campsites. These camps should be leased out to these people." For effective implementation of the new policy, the forest department is conducting an orientation course for its staff at the national mountaineering institute, Uttarkashi.