Variations in solar radiations contribute little to global warming and researchers say efforts to check the phenomenon must focus on greenhouse gases. 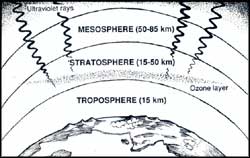 TWO RECENT climate studies have found that while changes in solar radiation do contribute to global warming, this effect is small as compared to that of human-made greenhouse gases.

The increase in the annual average global temperature at the earth's surface was as much as 0.8o C between 1880 and 1990. This change was associated with the increase in the concentration of greenhouse gases such as carbon dioxide, nitrogen dioxide, methane and chlorofluorocarbons, which do not allow heat to escape from the earth's atmosphere. But there have been also fluctuations in the global mean temperature, such as a sharp rise in the 1920s and a decline between 1940 and 1970, which are not consistent with the steady increase in greenhouse gas levels throughout this period.

This led scientists to study the role of the sun in global warming as it was believed that changes in the rate of solar radiation might be responsible for the temperature fluctuations. But this belief has been given the lie by two separate studies -- one by Michael Schlesinger and Navin Ramankutty of the University of Illinois at Urbana-Champaign in USA and the other by P M Kelly and T M L Wigley at the University of East Anglia in Norwich in the UK (Nature Vol 360, No 6402).

Kelly and Wigley analysed data for the period 1765-1985 and found most of the variability in emissions from the sun is in the ultraviolet radiation, which is absorbed in the upper regions of the atmosphere and, therefore, does not contribute to temperature rise at the earth's surface. This implies that solar variations play a limited role in causing temperature changes.

In the light of the sun's minor role, scientists at the Goddard Institute of Space Studies in New York emphasise that efforts to control global warming must continue to focus on greenhouse gas emissions.