CALL it a conspiracy between cloud and pollution. Stretches of clouds, impregnated with fine pollutants, or aerosols, reflect a large amount of sunlight over India back into space. This could be a major factor in the reduced radiation on the Indian soil, said researchers from Indian Institute of Tropical Meteorology (IITM), Pune. Their previous research showed the amount of sunlight over India has reduced 5 per cent in the past two decades.

Traditionally, solar dimming has been attributed to aerosols. The fine airborne particles of soot, ash, sulphur compounds and other pollutants form a blanket in the upper atmosphere, absorb or scatter the sunlight and prevent some of it from reaching the earth's surface. Tiny water droplets in the cloud are also known to scatter the sunlight and cause dimming.

To understand the interaction between cloud, aerosols and radiation, the researchers analysed daily solar radiation data recorded at 12 stations across the country between 1981 and 2006. "We analysed the data separately for clear and cloudy skies and found solar dimming was double on cloudy days than on clear sky days," said lead researcher B N Goswami, director of IITM. The total sunlight loss on cloudy days in the past 20 years was 31 Watt per sq m, compared to 15.86 Watt per sq m on clear sky days. Since solar dimming on clear sky days are likely due to high aerosol levels, the analysis shows clouds play a major role in solar dimming.

The initial finding did not satisfy B Padma Kumari, co-author of the study. "Solar dimming under cloudy days is expected. But why the radiation should be so low compared to the dimming caused by aerosols?" said Kumari. On further analysis, the researchers found the area covered by deeper clouds is increasing. Since dense deeper clouds can scatter sunlight efficiently, they play a major role in solar dimming. 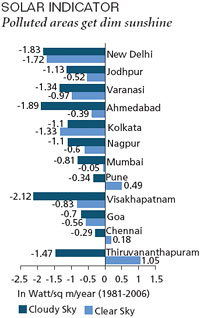 "This increasing formation of deeper clouds is largely due to high moisture level in the atmosphere, induced by global warming, and could also be influenced by rising levels of aerosols," the researchers noted in the March issue of Geophysical Research Letters. Kumari calls for more studies to understand the interaction.

M Rajeevan, scientist at the National Atmospheric Research Lab, Tirupati, offers an explanation: Aerosols act as the seed for cloud condensation and formation of water droplets around them. Increased level of aerosols in the cloud thus leads to more water droplets and bigger clouds. This changes the optical properties of clouds and they reflect more sunlight back into space.

Understanding the causes for sunlight reduction is important because solar dimming continues over India, in contrast to most parts of the world where dimming has given way to brightening, said Goswami. During the 1990s, aerosol burden decreased in industrialised countries as a result of changing economical and political conditions. Strict pollution control measures led to solar brightening there, he added.

Solar dimming does not mean a relief from warm atmosphere. Aerosols, by blocking the sunlight, might be offsetting surface warming but at the same time increase the atmospheric temperature by absorbing radiation. Dimming might also lead to an unequal heating of days and night. According to a study by IITM in 2007, the nights have warmed at double the rate of warming of days between the 1980s and 1990s.

Important of all such atmospheric imbalances is the impact on hydrological cycle. "Decrease in surface temperature may weaken the hydrological cycle by reducing evaporation. This in turn would have deleterious effects on vegetations and agriculture," said Kumari. The evaporation from the Indian continent already shows a decreasing trend. It has decreased 19 per cent between 1971 and 2000, according to Indian Meteorological Department in Pune.