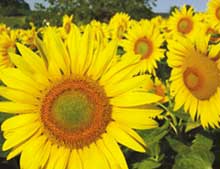 scientists at the University of Bonn, Germany, have identified a substance in sunflower that can prevent the human immunodeficiency virus (hiv) from reproducing in cell cultures. Called dicaffeoyl quinic acid (dcqa), the chemical is produced when the plant is infected with a fungus Sclerotinia sclerotiorum , which causes the white stem rot disease.

dcqa is in high demand to treat aids, but is not easily available. Its synthetic production is a complex process that drives its price as high as 1,000 Euros (about us $1,200) per milligramme. In an effort to cut the chemical's cost of production, Claudio Cerboncini of the Bonn Centre of Molecular Biotechnology (cembio) tried to synthesise the material in cell culture. He found that if the sunflower cells were grown in a nutrient solution together with S sclerotiorum, dcqa could be extracted from the medium. Now, researchers from cembio and Stiftung Caesar, a scientific foundation in Bonn are taking this work forward.

The researchers have also identified the genes that the sunflower activates to produce dcqa in reaction to the fungal infection. They feel that the plant probably produces an enzyme, which acts as a catalyst for the formation of dcqa. They are trying to incorporate the gene for this enzyme into a bacterium, which could then produce the enzyme in large quantities. The group has patented the various techniques to make dcqa and is looking for industry partners.